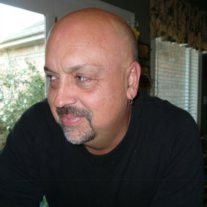 A Celebration of Life will be held Saturday, August 10, 2013 for Greg Peters, acclaimed Louisiana cartoonist and writer, who died on Friday, August 2 at New Orleans’ Ochsner Medical Center. He was 50 years old. The ceremony will take place at 2 PM at Martin & Castille Funeral Home, Southside location, in Lafayette. Mr. Peters’ survivors include his sons, Grey Wilder Peters and Magnus Peters; his parents, Reginald Peters and the former Kay Kent; his partner, Eileen Loh; former wife, Saundra Scarce; aunt, Sharon Strong; and mother-in-law, Shirley Romero Scarce. Mr. Peters was born on Sept. 24, 1962, in Marquette, MI. He graduated in 1980 from Marquette Senior High School, where he was a member of the debate team. He earned two degrees from Northern Michigan University: a bachelor’s degree in psychology in 1985, and a master’s degree in English in 1990. Peters was a doctoral fellow (ABD) in the English/ Creative Writing program at the University of Louisiana at Lafayette. His powerhouse intellect was the envy of his friends and fans. When it came to the humanities - particularly literature, philosophy, art, religion, history, music, politics, and current events - Mr. Peters’ knowledge was staggering. In conversation and writing, he could effortlessly veer from subjects as disparate as Buddhism and Black Flag, Dadaism and Descartes, PACs and post-structuralism, Shakespeare and The Simpsons. He funneled that knowledge into a worldview that championed people in need, and castigated those who misused power or authority, causing others to suffer as a result. (His compassion was matched by his humility and exactitude; Mr. Peters would hate the praise and generalizations in this obituary.) After moving to Louisiana in 1990 to study at UL, Mr. Peters became a vital and eminently respected member of the state’s publishing industry. For more than two decades, he was a graphic designer, cartoonist, and writer for newspapers and publications including Gambit Weekly, The Independent Weekly, and the Times of Acadiana. He was also featured in, and commissioned by, the national publications Fortune and The Chicago Reader. His work earned multiple awards from The Association of Alternative Newsweeklies, The Louisiana Press Association, and the New Orleans Press Club. The bulk of those honors were for “Suspect Device,” Mr. Peters’ brilliant comic strip. “Suspect Device” juxtaposed innocuous clip art and stock images with whiplash-funny humor and satire. He hated nothing more than hypocrisy, and double-talking politicians were the most frequent targets of his scathing commentaries. Loyal to no political party, Peters lampooned Republicans and Democrats alike, as well as Independents. Woe to the public figure caught lying or doing something offensive or stupid: they became fodder for “Suspect Device,” skewered and often re-imagined in fantastical worlds populated by historical figures, cartoon characters, or farm animals. (Privately, Mr. Peters’ caustic and wicked wit was legendary.) “Suspect Device” was praised and anthologized in the book Attitude 2: The New Subversive Alternative Cartoonists, resulting in exhibits of Mr. Peters’ work in New York City and Italy. The comic strip ran from 1996-2010. “Snake Oil,” Mr. Peters’ bi-weekly cartoon that mirrored the aesthetic approach of “Suspect Device,” ran in Lafayette’s Independent Weekly from 2003-2008. Peters’ design work was also coveted. In addition to his graphics work for the above publications and various businesses, he worked as a designer for LSU Press, and created posters for the annual Rising Tide conference in New Orleans. The sixth incarnation of the conference poster featured an original poem written by Mr. Peters, “Cheval Noir.” His Rising Tide work was an extension of his extensive blogging. Peters was an early user and advocate of blogs - and used the medium to excoriate pre- and post-Katrina failures. Mr. Peters spent a year in Egypt in the early 90s, teaching English as a Second Language for the U.S. Consulate General in Alexandria. In recent years he revisited his Midwestern roots, performing in musical reunions of the bands Borax and Voodoo Lawnmowers with his Ann Arbor friends. After residing in Lafayette for nearly two decades, Mr. Peters moved to New Orleans for the last 3 1/2 years of his life. He loved the Crescent City and it treated him well. When he wasn’t working as the Technical Editor/Graphic Designer for Geocent LLC, he could be found listening to Dropkick Murphys or Social Distortion at House of Blues, watching Saints games at Vaughan’s in the Bywater, drinking at Molly’s in the French Quarter or Mimi’s in the Marigny, savoring a meal at Serendipity or The Joint, having coffee at Envie, prowling every neighborhood for his new favorite Asian or African restaurant, and rabble-rousing with friends and family. Mr. Peters had a congenital heart defect. If he felt he was living on borrowed time, he never showed it. Even when he was feeling poorly, he never complained or acted the martyr. He cherished his family - especially his sons Grey Wilder and Magnus, whom he taught well. He took particular pride in their academic accomplishments, and in Grey Wilder’s musicianship and Magnus’ artistic abilities. His devotion, perseverance, and zest for life were inspiring. Mr. Peters passed away surrounded by family and friends who loved him deeply. The family requests that visitation be observed in Martin & Castille's Southside location, 600 E. Farrell Rd., on Saturday, Aug. 10 from 1 PM to service time. The 2 PM service will be held in Martin & Castille's La Fleur de Lis Chapel. In lieu of flowers, donations may be made to an educational trust fund established for Greg Peters' sons. Account details are pending. Alternatively, memorial contributions may be made in Greg Peters' name to: Donate Life America, 701 East Byrd Street, 16th Floor, Richmond, VA 23219. View the obituary and guestbook online at www.mourning.com Martin & Castille-SOUTHSIDE-600 E. Farrel Rd., Lafayette, LA 70508, 337-984-2811

A Celebration of Life will be held Saturday, August 10, 2013 for Greg Peters, acclaimed Louisiana cartoonist and writer, who died on Friday, August 2 at New Orleans&#8217; Ochsner Medical Center. He was 50 years old. The ceremony will take place... View Obituary & Service Information

The family of Greg Peters created this Life Tributes page to make it easy to share your memories.

Send flowers to the Peters family.