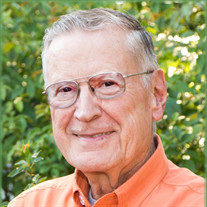 Funeral services will be held on Friday, February 4, 2022 at 12 Noon in La Chapelle de Martin & Castille for Harold Weller Poe, who lived a long and happy life until his death on February 1, 2022 surrounded by family in Youngsville, Louisiana, at 89. If you asked a hundred people who Hal Poe was, they’d give you many different answers. A professor. A horse trainer. An actor, director, and playwright. A world traveler. A husband, father, grandfather, and great-grandfather. He was all those things. Perhaps he will be best remembered as a storyteller. He loved reading, exploring, meeting people, and sharing his experiences with anyone within earshot. And if you made him laugh, you’d hear a roar that would shock and amaze you. Often, he made himself laugh. He was vibrant, charming, and fun. Hal Poe was born in Cincinnati, Ohio. He was the eldest of six children, and spent his youth in LaPorte, Indiana, then studied at Beloit College in Wisconsin. After graduation, he married Virginia, also from LaPorte, and moved to Tallahassee, Florida, where he worked as a graduate assistant in the Florida State University Theater Department. After completing his master’s degree, he became an assistant professor and theater technical director at the Southwestern Louisiana Institute (now University of Louisiana, Lafayette). A few years later, with the addition of three young sons, he and Virginia moved back to Tallahassee, where he began work on his doctorate at FSU. The family made its final move, returning to Lafayette in 1964. Hal earned his Ph.D. from Florida State in 1968 while teaching in Lafayette. Among his many accomplishments was taking a troupe of students to the Festival Mondial du Theatre Universitaire in Nancy, France, writing and producing the play “Gnista”, a melodrama based on the Belle Gunness legend set in his hometown of LaPorte, Indiana. He received the Distinguished Professor Award in 1971 and retired as a full professor from USL in 1979. Before retirement, the family bought a small rice farm and used it to raise thoroughbred racehorses. Long before YouTube, Hal would read a book about shoeing horses and learned to do it. He read about and trained his horses, even earning the license to bring horses to the local racetracks as a certified trainer. He is survived by Virginia, his wife of 67 years, his son Michael Poe and his wife Kathleen, son David Poe and his wife Cora, son Timothy Poe and his wife Linda, and grandchildren Alexander, Elsbeth, Helen, Mary, Jacob, and Shannon and great-grandchildren Mia and Isaiah. He is also survived by his sister Eileen Poe Louvis and his brother Daniel Poe. Preceding him in death were an infant daughter, his parents, Harold and Dorothy Poe, and brother Edward, sister Maren Ellen, and sister Victoria Poe Goff. A heartfelt appreciation is extended by the Poe family to the nurses and staff at Brookdale Senior Living Lafayette and the Hospice of Acadiana. In lieu of flowers, the family requests donations be made to Hospice of Acadiana, 2600 Johnston Street, Lafayette, LA 70503 https://hospiceacadiana.com/donate The family requests that visitation be observed in Martin & Castille's DOWNTOWN location on Friday from 10:00 A.M. until time of services. Interment will be in Holy Mary Mother of God Cemetery. View the obituary and guestbook online at www.mourning.com Martin & Castille-DOWNTOWN-330 St. Landry St., Lafayette, LA 70506, 337-234-2311

Funeral services will be held on Friday, February 4, 2022 at 12 Noon in La Chapelle de Martin & Castille for Harold Weller Poe, who lived a long and happy life until his death on February 1, 2022 surrounded by family in Youngsville, Louisiana,... View Obituary & Service Information

The family of Dr. Harold W. "Hal" Poe created this Life Tributes page to make it easy to share your memories.

Send flowers to the Poe family.