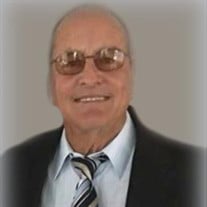 Funeral services will be held on Wednesday, April 27, 2022 at 10:00 AM in La Chapelle de Martin & Castille in Lafayette, for Hilton Richard, Sr., age 81, who passed away on Friday, April 22, 2022 at his residence in Lafayette. Interment will be in Lafayette Memorial Park Cemetery. Pastor Todd Menard will conduct the funeral services. Survivors include his beloved wife of 63 years, Shirley Hebert Richard; his children, Carlin Richard (Pat), Tammy Goudeau Powell (Michael), Wendy Richard Gautreau (Gary), Richie Richard (Bonnie), and Hilton Richard, Jr. (Lea); his grandchildren, Heather Abshire, Amy Richard, Jason Richard, Ryan Richard, Guy J. Goudeau (Terri), Hydie G. Gremillion (Lance), Tricia G. Watson (Jonathan), Tasha Gautreau (fiancé Ryan), Crystal Burns (Shane), Erin Flowers (Stace), Hannah Richard, Claire Albarado, and Tristen Albarado; 25 great-grandchildren, and 2 great-great-grandchildren; his sisters, Vicky Richard and Barbara Richard; and his brothers, Robert Richard (Sue) and Michael Richard (Linda). Hilton was preceded in death by his parents, Pete and Unez Richard; and his grandchildren, Gavin Goudeau and Addison Richard; and his son-in-law, Guy C. Goudeau. Hilton was retired having worked for Evangeline Maid Bakery for 27 years as a deliveryman. He served his country honorably in the United States Marine Corps. He enjoyed playing softball and golf, he was the master of boiling crawfish at family gatherings, but the thing he cherished the most was spending time with his family and grandchildren. A quote shared by Hilton, "When the day arrives that there are no more tomorrows for me, I want my family to know and never forget that they were, are, and always will be deeply loved by me." Pallbearers will be Hilton Richard, Jr., Carlin Richard, Richie Richard, Mike Powell, Guy J. Goudeau and Lance Gremillion. Honorary Pallbearers will be Gary P. Gautreau, Michael Richard and Robert Richard. The family requests that visitation be observed in Martin & Castille's DOWNTOWN location on Tuesday from 4:00 PM to 8:00 PM and will continue on Wednesday from 8:00 AM until time of services. A Rosary will be prayed on Tuesday at 7:00 PM in the funeral home. A heartfelt appreciation is extended by the Richard family to the staff of Traditions Hospice and Lea Richard for the loving care and support given during these last difficult days. View the obituary and guestbook online at www.mourning.com Martin & Castille-DOWNTOWN-330 St. Landry St., Lafayette, LA 70506, 337-234-2311

Funeral services will be held on Wednesday, April 27, 2022 at 10:00 AM in La Chapelle de Martin & Castille in Lafayette, for Hilton Richard, Sr., age 81, who passed away on Friday, April 22, 2022 at his residence in Lafayette. Interment will... View Obituary & Service Information

The family of Hilton Richard, Sr. created this Life Tributes page to make it easy to share your memories.