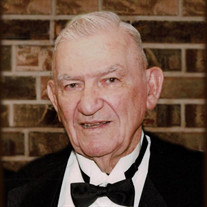 Funeral services will be held on Wednesday, October 20, 2021, at 2:00 PM in La Chapelle de Martin & Castille, 330 St. Landry St. in Lafayette for Jackson Jesse Sinclair, 88, who passed away on Sunday, October 17, 2021, at Our Lady of Lourdes Regional Medical Center in Lafayette. Reverend Mario Romero, Pastor of Holy Cross Church in Lafayette will officiate the funeral services. Interment will be in Calvary Cemetery. Survivors include his beloved wife of 67 years, Bonnie Latiolais Sinclair; one daughter, Jackie T. Sinclair; one son, David W. Sinclair; one sister, Betty Lee Smith and her husband, Earl; two grandchildren, Jenny A. Leger, and Eric M. Leger and his wife, Lindsey; three great grandchild, Kole M. Hartdegen, Owen M. Leger, and Elliott T. Leger. He was preceded in death by his parents, Charles B. Sinclair, and Valera C. Talley Sinclair; and five brothers, Charles “Buck” R. Sinclair, Donald E. Sinclair, Carl Ross Sinclair, Robert G. Sinclair and Jerry D. Sinclair. Jackson Jesse Sinclair was a native of Laverne, Oklahoma and resident of Lafayette, Louisiana for most of his life. Jack was a 1952 Graduate of Ponca City High School in Ponca City, Oklahoma. Following graduation, Sinclair joined the United States Air Force and served his country proudly during the Korean Conflict and Vietnam Era. During his time in the Air Force, he was a Crew Chief with SAC on B-47s, an Aircraft Maintenance Inspector and earned the Air Force Commendation Medal and the Meritorious Service Medal. He later retired from the US Air Force after serving 20 years (1952-1972). After retirement with the U.S. Air Force, he became a member of The Retired Enlisted Association, the B-47 Jet Bomber Association, and the 44th Bomber Wing Association. Jack, as he was known by family and friends, settled in Lafayette in 1972 and began his second career with the City of Lafayette, of which he retired from after 17 years of service. Jack enjoyed travelling with his wife Bonnie in their motorhome throughout the United States and Canada. They belonged to the Cruisin’ Cajuns Camping Club, C’est La Vie Camping Club, and the SMART Cajuns (special military active and retired travel club). Jack was also an avid golfer and enjoyed spending time with his family, he was a loving husband, father, grandfather, great grandfather, brother, and friend. He will be dearly missed by all who knew and loved him. Pallbearers will be Eric Leger, Chris Gallo, Matthew Stagg, Greg DeRouen, Chris Clark, and Rickey Leger. Honorary Pallbearers will be Kole M. Hartdegen, Owen M. Leger, and Ethan Stagg. The family requests that visitation be observed in Martin & Castille's DOWNTOWN location on Wednesday, October 20, from 10:00 AM until time of services. Memorial contributions can be made in Mr. Sinclair's name to the Air Force Memorial in Washington, DC (901 7th Street NW, 4th Floor, Washington, DC 20001-3719, 202-789-7000) or the Retired Enlisted Association (12200 E. Briarwood Ave., Suite 250, Centennial, CO 80112, 1-800-338-9337.) A heartfelt appreciation is extended by the Sinclair family to the doctors, nurses, and staff at Our Lady of Lourdes Regional Medical Center in Lafayette. View the obituary and guestbook online at www.mourning.com Martin & Castille-DOWNTOWN-330 St. Landry St., Lafayette, LA 70506, 337-234-2311

The family of Jackson Jesse Sinclair created this Life Tributes page to make it easy to share your memories.

Send flowers to the Sinclair family.