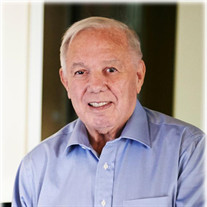 Funeral Services will be held on Monday, April 19, 2021 at 1:00 PM in Martin & Castille’s La Fleur de Lis Chapel in Lafayette, Louisiana for James “Jim” Devin Moncus, 81, who died on Wednesday, April 14, 2021 at his home surrounded by his wife, Ruth and stepson, Van. The family will receive guests on Monday, April 19, 2021 from 9:00 AM to time of service. Entombment will be in St. John Mausoleum. Senior Pastor Weldon Moak of First Baptist Church of Broussard will conduct the funeral services. Jim is survived by his beloved wife of 23 years, Doris Ruth Hupp Moncus; one daughter, Jennifer Lewis and her husband Jeff; one stepdaughter, Gena Epps Francis; one stepson, Van Epps and his wife Rhonda; one former step-daughter, Caroline Helm Huval; seven grandchildren, Hayley Lewis, Michael Francis, Kristian Francis, Nicholas Francis, Clayton Francis, Ryan Epps and Gabrielle Epps; and one great granddaughter, Sawyer Gray Epps. He is preceded in death by his parents, Frank Calvin Moncus and Helen Elizabeth Harbough Moncus; and two sisters, Penny Pope and Linda Stratton. Pallbearers will be Clay Francis, Kristian Francis, Nicholas Francis, Van Epps, Randy Lolley and Shane Spallino. Honorary Pallbearers will be Rufus Chavez, Ed Lamb, Michael Francis, Raja Gharazeddine and Ryan Epps. Jim was born on September 29, 1939 in Houston, Texas. He started his career at the age of eight as a paperboy for the Houston Chronicle. Working for the Chronicle made him feel as though he was an independent businessman. It was then that his passion for entrepreneurship was born. Jim joined the United States Marine Corp and returned to Houston in 1962 to work in the oil industry. His first job in Casper, Wyoming ended abruptly, and Jim found himself without a job or a place to sleep. He took the advice of a friend and traveled to Lafayette, Louisiana to seek work. Desperate, hungry, and exhausted from travel, Jim asked for a job, preferably offshore where he knew there would be a bunk and food to eat. Luckily, Lamb Oil was in need of help and sent him out that very night. He stayed with Lamb for over a decade, forging a friendship with Ed Lamb that lasted a lifetime. Jim never forgot his beginnings. Later in life it became his privilege to care for those most in need. In 1974, Jim founded his first company of many. He began Devin International with a meager amount of money, brokering oil field equipment in the booming Lafayette market. Within three years, the business turned a multi-million-dollar profit and Jim never borrowed a penny. His miraculous success was due in part to his friendly, easygoing management style and his keen business acumen. Jim patented various oilfield tools still being used today. Among his diverse personal interests, Jim built model trains, collected art and loved animals, especially his pet dachshunds. Jim was talented in his own right, as he sang in a choir, played the piano and learned to fly. One of his most memorable accomplishments was the opportunity to fly himself to New York to sing at Carnegie Hall. In his desire to give back to the city that had been so good to him, when Jim sold Devin International he founded the James Devin Moncus Family Foundation in 2008 to share his fortune with numerous local and regional non-profits. Jim believed if you have been blessed with success, sharing with others was a necessity. He sought initiatives with wide reach to help many in the community but individuals experiencing hardship held a soft spot in his heart. It was not out of the ordinary for him to offer unexpected gifts of kindness when he came upon someone with a strong work ethic who needed a hand up. The Moncus Foundation locally invested millions to establish a new city park, further the arts and education and ensure the very best of health care right here at home. He established scholarships and endowed professorships, supported animal rescue and funded school programs for the inclusivity of all. Jim Moncus loved this community. He was immediately touched by the people of Acadiana who were always so inviting and willing to share everything from their food to their time. He wanted to be known as someone who gave something back to make this city the best it can be and his wish was for his legacy to be forever shared with families here for decades to come. Jim’s charitable spirit was recognized through a number of philanthropic awards. The most notable to him included becoming a University of Louisiana Distinguished Donor and receiving the Community Foundation of Acadiana Leader in Philanthropy Award. In 2017, Governor John Bel Edwards and the Friends of Louisiana Public Broadcasting named him a Louisiana Legend, one of the state’s most influential and visionary citizens. As a loyal friend and benefactor of the University of Louisiana at Lafayette for over two decades, Jim Moncus’ investments span the campus community providing support for students in arts, nursing, sciences and athletics. He established seven separate scholarships at the University, most notably five Superior Graduate Student Scholarship endowments that will provide financial assistance in perpetuity to graduate students pursuing a higher degree. He was recently nominated to receive an Honorary Doctor of Nursing Practice for his contributions to the University and community. The degree was to be conferred at the May 14, 2021 Spring Commencement ceremony. In lieu of flowers, the family hopes you will be inspired by his giving spirit to make memorial contributions in James "Jim" Devin Moncus' name to any non-profit organization of your choosing in Acadiana. A heartfelt appreciation is extended by the Moncus family to Dr. Kemp Coreil, his nurse Sherry Begnaud, the doctors, nurses and staff at Our Lady of Lourdes Regional Medical Center and the infusion team at the Lourdes JD Moncus Cancer Center. View the obituary and guestbook online at www.mourning.com Martin & Castille-SOUTHSIDE-600 E. Farrel Rd., Lafayette, LA 70508, 337-984-2811

The family of James "Jim" Devin Moncus created this Life Tributes page to make it easy to share your memories.

Send flowers to the Moncus family.