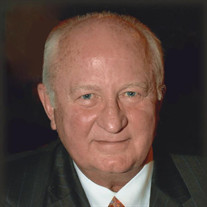 Funeral services will be held on Saturday, February 13, 2021, at 10:00 AM in La Chapelle de Martin & Castille for James William "Jim" Vildibill III, 71, who died on Monday, February 8, 2021 at Ochsner Lafayette General Medical Center . Inurnment will be in the Greenlawn Memorial Gardens Cemetery at a later date. Reverend Jon Tellifero, Pastor of Covenant United Methodist Church, will conduct the funeral services. For family members and friends who are unable to attend on Saturday February 13 at 10:00 AM, the service will be live-streamed to a Memorial Facebook Group dedicated to James William Vildibill III. To join the group, click the link below and then "join group". The video will appear on this group at service time 10:00 AM. You may also share memories, pictures and condolences to the family in this group. Facebook link: www.facebook.com/groups/JamesVildibill/ Survivors include his beloved wife, Janice Broussard Vildibill; his children, James William Vildibill IV, Scarlet Camille Vildibill, Grace Marie Vildibill and Joseph William Vildibill; two grandchildren, Cameron Jayne Vildibill and Connor Lawrence Vildibill; his siblings, Donna Vildibill Wingo and her husband, Pat, and Chrys Vildibill; numerous nieces and nephews; and his in-laws, Elsie and Jules Broussard. He was preceded in death by his parents, Dr. James W. "Bill" Vildibill, Jr. and Jayne Brennan Vildibill. Jim was a native of New Orleans and a resident of Lafayette for majority of his life. He was a graduate of Lafayette High School, attended Tulane University and graduated with a Bachelor of Science Degree in History from the University of Southwestern Louisiana. Jim was retired from the City of Lafayette as a Facilities Maintenance Supervisor after twenty-seven years of service. Jim was active in several Mardi Gras Krewes throughout Acadiana. He was a member of the Krewe of Gabriel since 1999, was a long-time dedicated float rider and also served as a Royal Duke in 2018; Krewe of Attakapas, where he served as Duke in 1991; Greater Southwest Louisiana Mardi Gras Association where he was a long-time board member and served as Parade Chairman, Ball Chairman, Ball Captain, Band Selection Chairman, and Liaison with City of Lafayette Government and proudly served as Greater Southwest Louisiana Mardi Gras Association President in 2007. Jim also volunteered his time and talent to various Krewes through the years with construction and decorating. Jim was a member of Jaycees Club, Beavers Club, Boy Scouts of America, BCB Anglers Club, LAMA Club, and a founding member of Trinity Presbyterian Church. He had a love for woodworking and a newfound love for blacksmithing. The family requests that visitation be observed in Martin & Castille's DOWNTOWN location on Friday from 4:00 PM until 8:00 PM and will continue on Saturday from 8:00 AM until time of services. In memory of Jim's spirit, the family would ask that you dress for the wake and service in bright colors. Memorial contributions can be made in Jim's name to Covenant United Methodist Church. A heartfelt appreciation is extended by the Vildibill family to the staff at Oschner Lafayette General Medical Center ICU. View the obituary and guestbook online at www.mourning.com Martin & Castille-DOWNTOWN-330 St. Landry St., Lafayette, LA 70506, 337-234-2311

The family of James "Jim" William Vildibill III created this Life Tributes page to make it easy to share your memories.

Send flowers to the Vildibill family.