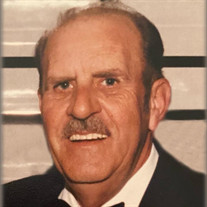 A Mass of Christian Burial will be held for Mr. James Lee Martin at 11:00 AM on Friday, February 4, 2022 at Sts. Peter and Paul Catholic Church of Scott. Jimmy, as he was affectionately known, was 88 when he passed away on Monday, January 31, 2022 at Our Lady of Lourdes Regional Medical Center in Lafayette. The family requests that visitation be observed in Martin & Castille's SCOTT location on Thursday, February 3, 2022 from 3:00 PM to 8:00 PM and will continue on Friday, February 4, 2022 from 8:00 AM until time of services at 11:00 AM. A Rosary will be prayed on Thursday, February 3, 2022 at 6:00 PM in Martin & Castille Funeral Home. Entombment will be in Sts. Peter and Paul Cemetery. Reverend Mark Derise, Pastor of Sts. Peter and Paul Catholic Church of Scott, will conduct the funeral services. Survivors include his beloved wife of 63 years, Barbara Roger Martin; his daughter, Pam Zagar(John); his son, Troy Martin(Lynette); his son, Craig Martin(Shawn); his grandchildren, Shane Zagar(Britney), Cody Martin(Brikki), Kyle Martin(April), Lorin Martin, Madisyn Martin, Ashtyn Waguespack(Brock Doucet) and Austin Waguespack; his great-grandchildren, Cohen, Sawyer, Cort and Hank Martin, Audrina and Coy Zagar, Harper and Stella Waguespack, Fynn Strassel and Beaux Doucet and his sister-in-law, Eva Torian. He was preceded in death by his parents, Walter and Lela Patin Martin. Jimmy was gifted with a servant's heart and was a lifelong resident of Scott. He attended Scott High School and participated in football and boxing. One of his proudest accomplishments was achieving the rank of Eagle Scout. Upon graduating from high school, he would gratefully join the United States Army. Upon honorable discharge, Jimmy returned home to marry the love of his life and begin his professional career. He was a dedicated employee of GMAC for 35 years until his retirement. Jimmy was a lifelong parishioner of Sts. Peter and Paul Catholic Church and served as usher and handled the parishes weekly financial offerings. He was a member of the Holy Name Society. He shared his gift and love of sports throughout his lifetime. He was an active supporter of youth athletics in Lafayette and Scott communities. He served many years on the City of Lafayette Parks and Recreation Board, as well as President of West Area Youth Sports in Scott. He was a Ram Booster and supporter of Acadiana High School Athletics for many years. His involvement also included his participation in running track meets at USL. He took great pride in cooking his delicious pork jambalaya with great friends for any gathering. His greatest joy was always being his children and grandchildren’s biggest fan in the stands. Which affectionately made him “Pop” to all of their teammates. Upholding the honor of pallbearers will be Troy Martin, Craig Martin, John Zagar, Shane Zagar, Cody Martin and Kyle Martin. View the obituary and guestbook online at www.mourning.com Martin & Castille-SCOTT-802 Alfred St., Scott, LA 70583, 337-234-2320

A Mass of Christian Burial will be held for Mr. James Lee Martin at 11:00 AM on Friday, February 4, 2022 at Sts. Peter and Paul Catholic Church of Scott. Jimmy, as he was affectionately known, was 88 when he passed away on Monday, January 31,... View Obituary & Service Information

The family of James Lee Martin created this Life Tributes page to make it easy to share your memories.

A Mass of Christian Burial will be held for Mr. James Lee Martin...

Send flowers to the Martin family.