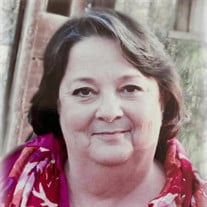 A Celebration of Life will be held on Wednesday, August 19, 2020 from 2:00 PM to 5:00 PM, with eulogies beginning at 3:30 PM in Martin & Castille's Downtown Location for Janet Attales Dupuis, 65, who passed away on Friday, August 14, 2020. Janet Attales Dupuis was born on May 3, 1955 in Ville Platte, Louisiana to a large and loving family. Being the fourth of nine children, and having lost her father at a very young age, Janet learned early to take care and nurture those around her, which she carried into her adult and late life, always looking after those she loved and eventually attending University of Louisiana and obtaining a nursing degree to continue her inherent nature of selfless compassion for others. Janet worked as a nurse here in Lafayette for over 20 years and after retirement, went on to acquire an additional degree in teaching to pursue her first love...knowledge. Janet was a book lover, often reading anything she could get her hands on and that curiosity for understanding led her to love many things; the written word, old movies, music, art, cooking, decorating, nature and all the beauty that surrounded us, but most importantly her family. Nothing made her more proud and fulfilled than being a mother to her two children, and later a “Yaya” to her two grandchildren, whom she gave her life to. Her warm, accepting spirit and brilliant mind will be greatly missed. She was preceded in death by her parents, Wilson and Marjorie Rabalais Attales; her siblings, Gerard Attales and Suzanne Attales. Survivors include her beloved children, Monica Dupuis (Tres) and Rob Dupuis; her grandchildren, Branan Wilder Bernis and Lennon Bernis; her siblings, Yvonne Bergeron (Edward), Sheila Long (Gordon), Craig Attales (Jeanne), Beth Attales (Charlie), Lola Fontenot (Randy), and Mark Attales; many nieces and nephews; friends, and the father of her children, Lige Dupuis. In lieu of flowers memorial contributions can be made in Ms. Dupuis name to the Louisiana Special Olympics, c/o Acadiana Special Olympics, 46 Louis Prima Drive, Suite A, Covington, LA. 70433. View the obituary and guestbook online at www.mourning.com Martin & Castille-DOWNTOWN-330 St. Landry St., Lafayette, LA 70506, 337-234-2311

The family of Janet Attales Dupuis created this Life Tributes page to make it easy to share your memories.

Send flowers to the Dupuis family.