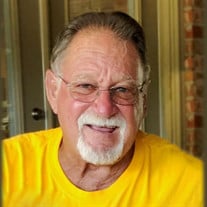 A Mass of Christian Burial will be held on Saturday, April 10, 2021 at 11:00 AM in Sts. Peter & Paul Catholic Church in Scott for Jasper James Labbe, 68, who died on Wednesday, April 7, 2021 at his home in Duson surrounded by his family. Entombment will be in Sts. Peter & Paul Mausoleum. Reverend Mark Derise, Pastor of Sts. Peter & Paul Catholic Church in Scott will be the Celebrant of the Mass. Survivors include his beloved wife of 48 years, Donna Faye Alleman Labbe; two daughters, Bridget Labbe and Melanie Credeur; one son, Leo Labbe and his wife, Lacy; his mother, Maudra Duhon Labbe; four sisters, Katie Labbe Meche (Brysen), Kathy Labbe Thibodeaux, Vicky Labbe Vafai (Medhi) and Melissa Labbe; one brother, Carl Labbe; twelve grandchildren, Bracquel Lavergne (Eric), BritneAna Vice (Devin), Bailey Simon (Devin), Briley Simon, Blakley Simon, Cohen Simon, Brimme Simon, Logan Credeur, Chance Credeur, Ethan Labbe, Maddox Labbe and Addison Labbe; and seven great-grandchildren, AveriAna, Kooper, Konnor, Stetson, Huxson, Beaux and Tucker. He was preceded in death by his father, Leo Charles Labbe; his great grandson, Maverick Lavergne; his maternal grandparents, Henry and Eunice Duhon; his paternal grandparents, Prospere and Letha Labbe; sister-in-law, Cindy Labbe and brother-in-law, Ronnie Thibodeaux. Jasper James Labbe was born on February 14, 1953 in Lafayette, Louisiana and was a resident of Duson for most of his life. He was a Veteran of the United States Army Reserve and proudly served his country. Mr. Labbe was a loving husband, son, father, grandfather, great-grandfather and friend to all who knew him. He cherished his family and enjoyed spending time with them. He will be dearly missed by all who knew and loved him. Pallbearers will be Leo Labbe, Logan Credeur, Chance Credeur, Carl Labbe, Damon Labbe and Perry Alleman. The family requests that visitation be observed in Martin & Castille's SCOTT location on Friday from 10:00 AM to 8:00 PM and will continue on Saturday from 8:00 AM until time of services. A Rosary will be prayed on Friday at 6:00 PM in Martin & Castille Funeral Home. A heartfelt appreciation is extended by the Labbe family to the nurses, staff and doctors of Cancer Center of Acadiana, Dr. Phil Prouet, Dr. Perri Prellop, Dr. Mark Dawson, as well as the nurses of Amedysis Hospice, especially Rhonda Foreman, for their kindness and compassion given to Mr. Labbe and his family during their time of need. View the obituary and guestbook online at www.mourning.com Martin & Castille-SCOTT-802 Alfred St., Scott, LA 70583, 337-234-2320

A Mass of Christian Burial will be held on Saturday, April 10, 2021 at 11:00 AM in Sts. Peter & Paul Catholic Church in Scott for Jasper James Labbe, 68, who died on Wednesday, April 7, 2021 at his home in Duson surrounded by his family. Entombment... View Obituary & Service Information

The family of Jasper James Labbe created this Life Tributes page to make it easy to share your memories.

A Mass of Christian Burial will be held on Saturday, April 10,...

Send flowers to the Labbe family.