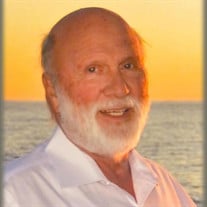 A Liturgy of the Word Memorial Service will be held for Jay Luther Fletcher on Thursday, January 6, 2022 at 3:00 PM in La Chapelle de Martin & Castille in Lafayette, 330 St. Landry Street, Lafayette, La 70506. On Friday, December 17, 2021 at the age of 72, Jay departed this life and joyfully began his Holy journey. Surely, as he is hunting and fishing, he is also impatiently awaiting the arrival of his loved ones. His journey began with his wife, two children and Carl and Joyce Roof (best friends) by his side while Jesus took his hand and walked him to paradise. The Fletcher family will receive guests in Martin & Castille's DOWNTOWN location on Thursday, January 6, 2022 from 1:00 PM until the time of service at 3:00 PM. Inurnment will be at St. John Cemetery. Reverend Steven C. LeBlanc, Pastor of St. Basil Catholic Church in Judice, will conduct the funeral services. Survivors include his beloved wife of 52 years, Betty Clonaris Fletcher of Lafayette; his daughter Mary Kate "Katie" Fletcher; his son, John Jay "JJ" Fletcher; his three brothers, Fred Wadleigh, James Wadleigh, and Frank Wadleigh; his five grandchildren, Elizabeth Hobbs, Kenneth Hobbs, Landon Fletcher, Lawson Fletcher, and Owen Fletcher; his two great grandchildren, Richard Bradley, IV and Fletcher Bradley. Jay was preceded in death by his parents, Luther Jay Fletcher and Barbara Ann Crouse Wadleigh; his brothers, David Wadleigh, Jr. and John Fletcher; his sisters, Rebecca Snow and Elaine Small, and his beloved aunt, Elaine Fritton. Jay Luther Fletcher was born at his home in Vermont and died at home in Lafayette. He met the love of his life, Betty, at a street dance in Lebanon, New Hampshire, while still in high school. He dedicated eight years of his life to serving in the U.S. Navy and Coast Guard. While stationed in Brunswick, Maine, Mary Kate, their daughter, was born. Later while stationed in Hawaii, he graduated from Chaminade University of Honolulu. During this time their son, John Jay was born. As a philanthropic entrepreneur, Jay successfully developed and administered 16 businesses. He was an avid hunter. One story he delighted in telling was his encounter with a bear which he won. His passion for fly fishing and brook fishing brought him great joy. He never lost his Vermont spirit and wisdom, adopting a WWII motto, "Use it up, wear it out, make it do or do without". Jay was very athletic and enjoyed watching and playing sports, including golf - he was very proud of his hole in one! He enjoyed games of chance, especially poker. Jay's plain spoken manner often put people "off", however, he possessed a deep loving heart for humanity. His caring for people often exhibited itself through his humor and wit. Jay's playfulness and liveliness will be especially missed by his family and closest friends. Memorial contributions can be made in Jay Luther Fletcher's name to Arbor Day Foundation, www.arborday.org and/or to Tunnel to Towers Foundation, www.tst.org. A heartfelt appreciation is extended by the Fletcher family to Hospice of Acadiana, Senior Helpers and all of his care givers who lovingly met his needs and exceeded his families expectations. View the obituary and guestbook online at www.mourning.com Martin & Castille-DOWNTOWN-330 St. Landry St., Lafayette, LA 70506, 337-234-2311

The family of Jay Luther Fletcher created this Life Tributes page to make it easy to share your memories.

A Liturgy of the Word Memorial Service will be held for Jay Luther...

Send flowers to the Fletcher family.