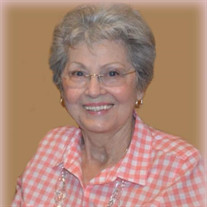 Funeral services will be held on Tuesday, July 20, 2021, at 1:30PM in La Chapelle de Martin & Castille in Lafayette, for Jessie Lee Fournier Duhon, 81, who was called home on July 17, 2021, surrounded by her family who adored her and she can finally rest in peace in the arms of our Lord Jesus Christ. The family requests that Visitation be observed in Martin & Castille’s DOWNTOWN location on Tuesday from 10:00AM until the time of service. A Rosary will be prayed at 12:30PM led by Stella Kellner. The Reverend Howard Blessing will officiate the services. Interment will be in Holy Mary Mother of God Cemetery. Left to cherish her memory are her children Gwen Frederick (Richard), Jerome M. "Jerry" Duhon, Jr. (Kandice) & Lora Biessenberger (Douglas); nine grandchildren Christopher Pellerin, Brandon Pellerin, Michelle Jones, Lainey Robinson, James Trantor, Catherine Oliver, Laurie Veillon, Delana Manuel and Jessica Babineaux; one brother Steven Wayne Fournier, Sr. (Joyce); and 24 great grandchildren. Jessie is preceded in death by her beloved husband Jerome M. “Jay” Duhon, Sr.; her parents Leroy Fournier and the former Jeanne Granger; a brother Louis Charles Fournier, Sr.; and one grandson, Joshua Lee Babineaux. Jessie was born in Lafayette Louisiana to Leroy and Jeanne Fournier on May 26, 1940. She attended Cathedral Carmel graduating in 1958. Growing up, Jessie liked to play baseball, participated in 4-H and the Glee Club. Jessie retired in October of 1996, as Manager of the U.S.L. Federal Credit Union after 28 years of service. Jessie was blessed enough to complete her bucket list with her husband, Jay, & even got to take some trips twice! Through the years, she and Jay shared numerous hobbies. A few of which included riding Goldwing motorcycles with the local Goldwing Club, sailing on their Catamaran, Square Dancing, and traveling in their RV with the Cruising Cajuns and the Retired Military Groups. Jessie also loved gardening, birds, playing Slotomania & Words with Friends, and watching Wheel of Fortune. But most of all Jessie loved her family. Her happiest days were when the entire family would go to their house for the holidays & they would provide Fun Jumps and waterslides. Pallbearers will be Christopher Pellerin, Brandon Pellerin, Steve Fournier, Stevie Fournier, Richard Frederick and Jerry Duhon. The family would like to extend its gratitude to the staff at Our Lady of Lourdes Heart Hospital for their care & kindness given to their precious mother. Martin & Castille-DOWNTOWN-330 St. Landry St., Lafayette, LA 70506, 337-234-2311

Funeral services will be held on Tuesday, July 20, 2021, at 1:30PM in La Chapelle de Martin & Castille in Lafayette, for Jessie Lee Fournier Duhon, 81, who was called home on July 17, 2021, surrounded by her family who adored her and she can... View Obituary & Service Information

The family of Jessie Fournier Duhon created this Life Tributes page to make it easy to share your memories.