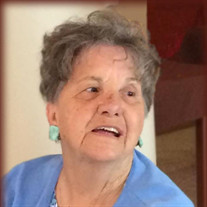 A Mass of Christian Burial will be held for Mrs. Joan Schexnayder Trahan on Tuesday, March 9, 2021 at 11:00 AM at St. Anne Catholic Church of Youngsville. JoAnn, as she was affectionately known, went home to be with the Lord on Friday, March 5, 2021 at her daughter's residence in Youngsville surrounded by her family. The family requests that visitation be observed in Martin & Castille's SOUTHSIDE location on Monday, March 8, 2021 from 4:00 PM until 8:00 PM and will resume on Tuesday, March 9, 2021 from 8:00 AM until the time of services at 11:00 AM. Interment will be in St. Anne Cemetery. A Rosary will be prayed on Monday, March 8, 2021 at 6:30 PM at Martin & Castille Funeral Home SOUTHSIDE location. Reverend Michael Russo, Pastor of St. Anne Catholic Church of Youngsville, will conduct the funeral services. JoAnn was gifted with a servant's heart and was known as the matriarch of her family. She was a devoted member of St. Anne's Catholic Church in Youngsville where she served as a Eucharistic Minister and a member of the Ladies Alter Society. Her ministry included going visit homebound members of the church to distribute communion. She also committed her Thanksgiving day serving meals to the less fortunate. She was a manager for Don's Seafood and Steakhouse, Downtown for over 30 years. During that time, she opened and managed new locations in Alexandria and Lake Charles. She enjoyed serving up Don's delicious food for many years at Festival Acadiens. She also served as president of the Lafayette Restaurant Association. Some of her hobbies included horseback riding and trail rides in her younger years. However, Cajun dancing, bowling and playing Bouree were her favorite pass times. She was always involved in her children's and grandchildren's lives. On any given weekend she could be found cheering for the kids wrestling, basketball, swimming, baseball, softball, football and dance. Her devotion to wrestling began with her younger son and continued to this day with her grandkids and great-grandkids. She was a past den mother of cub scouts in Youngsville. JoAnn was a great cook and the Trahan house was always the gathering place for family and friends alike. There was always a pot of gumbo on the stove or BBQ for anyone who stopped by. She will be deeply missed by all who knew her and memories of her will be cherished for a lifetime. Survivors include her daughters, Gwendolyn Trahan Faulk and her husband, James, Brenda Trahan Reaux, Priscilla Trahan Girouard and her husband, Jacque and Angela Trahan Spooner; her sons, Dwayne "Neggy" Trahan and his wife, Linda, Mitchell Trahan and his wife Stacey, Howard "Joey" Trahan and his wife, Jennifer; her brothers, Wilton Schexnayder and his wife, Connie and Richard Schexnayder and his wife, Kay; she is blessed with twenty-one grandchildren; thirty-one great-grandchildren and numerous nieces, nephews, and godchildren. She was preceded in death by her loving husband of fifty-five years, Howard "Howee" Trahan; her parents, Mr. Wilfred "Charlie" Schexnayder and Mrs. Rowena Landry Schexnayder; her daughter, Vanessa Kay Trahan; her grandson, Cheney Storm Trahan; her son-in-law, Byron Reaux; her sisters, Dorothy Broussard, Mary Ann Fabacher and Melissa Schexnayder; her brothers, Alfred Schexnayder and Wilfred Schexnayder Jr. Upholding the honor of pallbearers will be Dwayne "Neggy" Trahan, Mitchell Trahan, Howard "Joey" Trahan, Wilton Schexnayder, Richard Schexnayder, James Faulk and Jacque Girouard. A heartfelt appreciation is extended by the Trahan family to the nurses, staff and doctors of Hospice of Acadiana for their kindness and compassion during this difficult time. View the obituary and guestbook online at www.mourning.com Martin & Castille-SOUTHSIDE-600 E. Farrel Rd., Lafayette, LA 70508, 337-984-2811

A Mass of Christian Burial will be held for Mrs. Joan Schexnayder Trahan on Tuesday, March 9, 2021 at 11:00 AM at St. Anne Catholic Church of Youngsville. JoAnn, as she was affectionately known, went home to be with the Lord on Friday, March... View Obituary & Service Information

The family of Joan "JoAnn" Trahan created this Life Tributes page to make it easy to share your memories.

A Mass of Christian Burial will be held for Mrs. Joan Schexnayder...

Send flowers to the Trahan family.