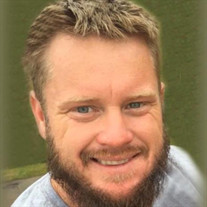 It is with sadness in their hearts that the family of Slade Henry announce his passing away. Slade was called home to be with The Lord and his Savior at the age of 36 on Wednesday, March 9, 2022. The Henry family will celebrate Slade’s life at a memorial service to be held on Thursday, March 17, 2022 at 11:00AM. Pastor Frank Ducharme will conduct the services at First Baptist Church in Scott, La. The family will receive visitors from 10:30AM until it is time for services to begin. Slade attended Central Catholic High School in Morgan City, where he excelled in football and made many lifelong memories along the way. He was known for teasing his friends about the Cowboys and Alabama, because the Saints and LSU were always his teams. As an experienced horseman, Slade loved roping and spending time with his Uncle Bill. In the summer you could find him at the beach, in the winter you could find him at the hunting camp. He was also known for his love of crawfish, cooking, and spending time with his family, but the real love of his life was his daughter, Peyton Elizabeth. Surviving members of the family include his daughter, Peyton Henry, of Morgan City; his mother, Stacie Doan Henry; his siblings, Kade (Meagan) Henry, Paige Henry, and Blake Henry; his nieces, McKinley and Raeleigh Henry; his nephews, Alijah Henry and Landon Henry, all of Duson; his paternal grandfather, Jake (Sue) Lyons, of Eunice; his paternal grandmother, Marcia Tidmore, of Patterson; his aunts and uncles, Suzanne (Bill) Fontentot, of Franklin, Theresa Findeisen, of Richlands, NC, Tootie (Calvin) Carrier, of Patterson, Nadine (Ray) Dees, of Jennings, Sonja Doan, of Noblesville, IN, Stephanie Doan, of DeRidder, Jerry Lynn (Mike) Breaux, of Gonzales, Frances (Allen) Smith, of Metairie; and numerous cousins. Slade was preceded in death by his father, Barry Henry; his maternal grandparents, Glenn and Ella Mae Doan; his paternal grandparents, Jerry and Gladys Henry; and his uncles, Stephen Henry and Curtis Landry. Memorial contributions can be made in Slade Henry’s name to A Place of Restoration at P.O. Box 1182 Gray, La 70659. View the obituary and guestbook online at www.mourning.com Martin & Castille-DOWNTOWN-330 St. Landry St., Lafayette, LA 70506, 337-234-2311

It is with sadness in their hearts that the family of Slade Henry announce his passing away. Slade was called home to be with The Lord and his Savior at the age of 36 on Wednesday, March 9, 2022. The Henry family will celebrate Slade&#8217;s... View Obituary & Service Information

The family of John Slade Henry created this Life Tributes page to make it easy to share your memories.

It is with sadness in their hearts that the family of Slade Henry...

Send flowers to the Henry family.