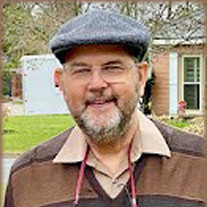 Funeral services will be held on Saturday, November 20, 2021 at 12:00 p.m. at Martin & Castille’s La Chapelle de Martin & Castille in Lafayette for John Joseph Hesterly. For family members and friends who are unable to attend on Saturday, November 20, 2021, the service will be live-streamed to a Memorial Facebook Group dedicated to John Joseph Hesterly. To join the group, click the link below and then "join group". You may also share memories, pictures and condolences to the family in this group. Facebook link: https://www.facebook.com/events/2990596281200707/ John returned peacefully to his Home with his family by his side after an almost year-long battle with brain cancer on Saturday, October 30 at 4:48 p.m. He was 69 years old. John is survived by his wife of 42 years, Kay Lea Duhon Hesterly of Lafayette; his son, Joseph Pitman Hesterly of Lafayette; his daughter Piper Hesterly Browne and her husband Justin of Austin, TX; and three grandchildren: Emmeline Kay (10), Hollis Taylor (8), and Edith Hesterly (4). He also leaves behind his brother and best friend James Pitman Jr. (Pit) and wife Elizabeth; his sister Cynthia and husband Ricky Powell; his brother Bill and wife Denise; and his sister Mary and husband Steve Frantz. John is also survived by numerous nieces and nephews, and a myriad of devoted and treasured friends. John is preceded in death by his father, James Pitman Hesterly Sr.; mother, Mary Moselle Alexander; father-in-law, Henry "Black" Duhon. John graduated from ULL in December of 2001, and was a petroleum landman for the entirety of his career. He worked alongside brother Pit as an independent, with a stint at Stone Energy Corporation from 2010-2015. He was particularly well-suited to some of the back office tedium that comes with this type of work, a trait that made him a diligent and loyal worker, and one that earned him LAPL Landman of the Year during the 1990s. John was exceedingly humble and kind-hearted. His children remember him as rarely offering a cross word, and always being quick with the extra syrup for his homemade pancakes. His grandchildren will remember long walks and his willingness to play any game they could conjure. John loved his dogs, a good meal prepared by Kay, and all forms of music. He was an avid reader and full of sage and thoughtful advice that he was happy to share if you could slow down to his pace for a moment and listen. Mostly, John loved his people. His love was quiet, understated, unwavering. He will be missed. Honorary Pallbearers will be Dr. Richard Bourgeois; Hollis Browne; Justin Browne; John Duhon; Steve Frantz; Bill Hesterly; Pit Hesterly; Joe Martin; Ricky Powell; and Tommy Smart. Reverend Howard Blessing will conduct the funeral services. The family requests that visitation be observed in Martin & Castille's DOWNTOWN location on Saturday, November 20, 2021 from 9:00 am until time of services. Memorial contributions can be made in John's name to Acadiana Animal Aide or Miles Perret Cancer Center. A heartfelt appreciation is extended by the Hesterly family to Kenneth “Breez” Guidry, Bryan Hebert, Victoria Papillion, and Diane Alexander. View the obituary and guestbook online at www.mourning.com Martin & Castille-DOWNTOWN-330 St. Landry St., Lafayette, LA 70506, 337-234-2311

The family of John Joseph Hesterly created this Life Tributes page to make it easy to share your memories.

Send flowers to the Hesterly family.