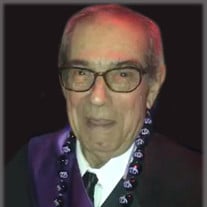 A Mass of Christian Burial will be held at 3:00 PM, on Friday, August 21, 2020, at Holy Cross Catholic Church in Lafayette, for Mr. John Ray LaPointe, 84, who peacefully passed away Monday evening, August 17, 2020 at his residence in Lafayette, with loved ones at his side. The family requests that visitation be observed in Martin & Castille's SOUTHSIDE location on Friday, August 21, 2020 from 9:00 AM to 2:30 PM. A Rosary will be prayed by the Knights of Columbus, Fatima St. Mary, Council 3470, on Friday, August 21, 2020 at 11:00 AM in Martin & Castille Funeral Home. Entombment will be in St. Alphonsus Mausoleum in Maurice. Reverend Mario Romero, Pastor of Holy Cross Catholic Church, will serve as Celebrant of the Mass and conduct the funeral services. Cherishing his memory include his beloved wife of 61 years, Mrs. Hazel Broussard LaPointe; two daughters, Sandy LaPointe Phillips and her husband Roger, and Charlotte LaPointe Wynn and her husband Bryan; a brother, Daniel LaPointe and his wife, Jeanne; his grandchildren, Taylor Wynn, Brennan Wynn(Claudia), Julia Duke and Jessica Duke. Mr. LaPointe was preceded in death by his parents, Mr. Simonet LaPointe and Mrs. Louise Duhon LaPointe; his paternal grandparents, Mr. Loadois LaPointe and Mrs. Olita Pontiff; and his maternal grandparents, Mr. Duplesis Duhon and Louisa Montet. Mr. Ray was a resident of Lafayette, Louisiana for most of his life. He was born on July 24, 1936 in Milton. He was a graduate of Milton High School, Class of 1954 and also a graduate with a degree in accounting from SLI. He proudly served his country as a member of the United States Army with an honorable discharge. Ray practiced accounting for 57 years, most notably, he was the owner of LaPointe Bookkeeping and Tax Service here in Acadiana. Ray was a 4th Degree Knight, with The Knights of Columbus, Fatima St. Mary, Council 3470. He was an active parishioner of St. Jules Catholic Church and recently Holy Cross Catholic Church. He was gifted with a special devotion to his faith, never missing his mass and praying his rosary faithfully. Ray was a proud member of Krewe of Triton and served as King Triton XII. His hobbies included hunting, fishing, cooking gumbo, attending UL, LSU, and the New Orleans Saints sporting events. His passion in life was working and spending time with his family. He will be deeply missed by all who knew him and memories of him will be cherished for a lifetime. Upholding the honor of pallbearers will be Roger Phillips, Bryan Wynn, Taylor Wynn, Brennan Wynn, Brady Blonkvist and Nick Miller. Honorary Pallbearers will be Daniel LaPointe and Lynn Broussard. Memorial contributions can be made in Mr. John Ray LaPointe's name to Hospice of Acadiana, 2600 Johnston Street, Suite 200, Lafayette, Louisiana, 70503, www.hospiceacadiana.com A heartfelt appreciation is extended by the LaPointe family to Hospice of Acadiana and his compassionate caregivers, Megan Chaudhry and Tara Laxey. View the obituary and guestbook online at www.mourning.com Martin & Castille-SOUTHSIDE-600 E. Farrel Rd., Lafayette, LA 70508, 337-984-2811

A Mass of Christian Burial will be held at 3:00 PM, on Friday, August 21, 2020, at Holy Cross Catholic Church in Lafayette, for Mr. John Ray LaPointe, 84, who peacefully passed away Monday evening, August 17, 2020 at his residence in Lafayette,... View Obituary & Service Information

The family of John Ray LaPointe created this Life Tributes page to make it easy to share your memories.

Send flowers to the LaPointe family.