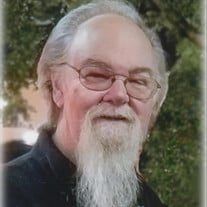 John Gordy Plouet, Jr. 68, a native of Lafayette, LA, was born on July 19, 1952 and passed away peacefully at his home on January 22, 2021. Catholic services will be held on Friday, January 29, 2021 at 2:00 PM in La Chapelle de Martin & Castille in Lafayette. Reverend Brian Taylor, Pastor of St. Genevieve Catholic Church will conduct the services. He was a 1971 graduate of Northside High School in Lafayette, LA. While still in high school he worked as a sheet metal apprentice under his uncle at Champagne Sheet Metal Works. After high school he joined the Army National Guard and served six years, stateside, as a Military Police. He was an expert marksman. He proudly served his country during the Vietnam Conflict. John provided well for his family working eighteen years at Champagne Sheet Metal Works, then working for P.H.I. as an aircraft painter. He continued to serve his home parish of Lafayette by working part time with the Lafayette Parish Sheriff’s Dept. and was a member of the Blue Knights International Law Enforcement Motorcycle Club, Inc. He proudly served as a 3rd Degree member of the Msgr.Teurlings Knights of Columbus Council 3202. Each month he thoroughly enjoyed the camaraderie of his fellow brothers. John is survived by his Sweetheart and loving companion, Pamela Hebert; Son, Christopher John Plouet of Breaux Bridge; Sister, Susan and husband, Eddie Broussard of Lafayette; Aunts Doris Plouet Doufort of Tampa, Florida and Theresa Joyce Racca Stelly of Lafayette, LA.; former spouse, Deborah Cormier Plouet, of Breaux Bridge, LA; Grandson, Stephen David; Niece, Shelly (Wakley) Maturin and her children, Drew, Kaden, and Kayli. He was predeceased by his father, John Gordy Plouet, Sr.; mother, Emma Dell Racca Plouet Migues, and stepfather, Otis Migues. John looked forward to visiting with his high school classmates at their monthly luncheon. John was also a lover of the outdoors, whether it was boating, fishing, camping, playing, coaching or umpiring baseball. He loved spending time with his family and friends. He loved his Harley, riding it for many years until his health denied him that pleasure. During his riding days he rode with many friends to many places around the Gulf Coast. At any given destination, he was infamous for shouting, “Let the Festivities Begin”! The family requests that visitation be observed in Martin & Castille's DOWNTOWN location on Friday from 9:00 AM to time of service. A Rosary will be prayed at 11:00 a.m. by the Msgr. Teurlings Knights of Columbus Council 3032 in Martin & Castille Funeral Home. A private inurnment will be held at Calvary Cemetery, at a later date. Honorary Pallbearers will be Jeffrey Paul Cormier, Mike Johnson, Eddie Broussard, Gerald Salazar, Byron Degeyter, and Donnie Begnaud. A heartfelt appreciation is extended by the Plouet family to the nurses, staff and doctors of St. Joseph Hospice and STAT Home Health for their kindness and compassion given to Mr. Plouet and his family during their time of need. View the obituary and guestbook online at www.mourning.com Martin & Castille-DOWNTOWN-330 St. Landry St., Lafayette, LA 70506, 337-234-2311

The family of John G. Plouet, Jr. created this Life Tributes page to make it easy to share your memories.