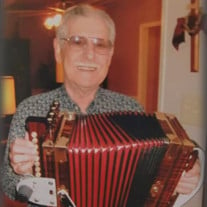 Catholic Funeral Services will be held for Mr. John R. Romero at 1:30 PM on Friday, February 5, 2021 in La Chapelle de Martin and Castille DOWNTOWN location. Mr. John was 91 when he went home to be with the Lord Jesus on Tuesday, February 2, 2021 at his residence in Lafayette surrounded by his family. The family requests that visitation be observed in Martin & Castille's DOWNTOWN location on Thursday, February 4, 2021 from 4:00 PM to 8:00 PM with a recitation of the rosary in French at 6:00 PM. Visitation will continue on Friday, February 5, 2021 from 9:00 AM until the time of service at 1:30 PM. Interment will be in Lafayette Memorial Park Cemetery. Reverend Brian Taylor, Pastor of St. Genevieve Catholic Church in Lafayette, will conduct the funeral services. Survivors include his beloved wife of 70 years, Jane Pepper Romero; his son, Patrick Romero and daughter-in-law Peggy, granddaughter, Angela Romero; granddaughter, Laycie Falcon, her husband, Wade, and their children, Isabella, Patrick, and Juliana; his daughter, Cyndi Benoit and son-in-law Mike; granddaughter, April Mellad, her husband, Randy, and their children, Maria and Elodie; granddaughter, Mitzi Benoit; daughter, Bridgette Romero and daughter-in-law, Holly Kuhlman; grandson, Joshua Sarkies; and granddaughter, Kaitlin Romero. John has three surviving sisters, Esther Kidder, Annabelle Roy, and Gladys Dupuis. He was preceded in death by his parents, Octa and Etta Romero, his son Travis Romero, and his grandson, Scott Benoit. John was born in Youngsville, Louisiana but lived the majority of his life in Lafayette. He attended Lafayette High School and proudly served in the United States Navy for four years. John was most notably a devoted and loving husband, father, grandfather and great grandfather. He spent his career as a Diesel Mechanic for Southern Pacific Railroad and after 41 years with the company, he lived life to the fullest in his retirement. John enjoyed playing the accordion for friends and family and was a distinguished member of the Stumpy Bayou Party Band for over ten years. He also enjoyed traveling the country and visiting local campsites in his coach with the love of his life for many years. He will be greatly missed by many. Pallbearers will be Randy Mellad, Wade Falcon, Joshua Sarkies, Mike Bryant, Nick Pepper and Mike Benoit. A heartfelt appreciation is extended by the Romero family to his beloved family members and many close friends. View the obituary and guestbook online at www.mourning.com Martin & Castille-DOWNTOWN-330 St. Landry St., Lafayette, LA 70506, 337-234-2311

Catholic Funeral Services will be held for Mr. John R. Romero at 1:30 PM on Friday, February 5, 2021 in La Chapelle de Martin and Castille DOWNTOWN location. Mr. John was 91 when he went home to be with the Lord Jesus on Tuesday, February 2,... View Obituary & Service Information

The family of John R. Romero created this Life Tributes page to make it easy to share your memories.

Send flowers to the Romero family.