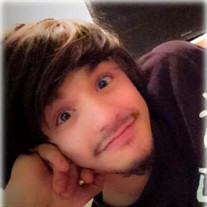 Johnathon "Johnny" Broussard , 26, ended his suffering on June 26, 2021 at his home in Lafayette. Survivors include his mother, Virginia "Ginny" Meyers and her husband Craig Joseph, of Lafayette, his son Cam (Caylum Wayne) Broussard and his mother, Emily Reed, his brother and best friend, Alex "Bub" Melancon and his partner Kaci Hebert and their daughter Kallie Hebert Melancon, all of Egan. His grandmother, Michiko Cunningham "Mimi," of Newport, NC, his aunt, Nana Cunningham, of Havelock, NC, an uncle, Robbie Cunningham and his wife, Cori, and their son, Leo Kenichi, all of Maumelle, AR. Johnny's dad, Earl J. Melancon, Jr. "T-Earl," who raised him as his own along side his sons, Gabe Melancon and Jordan Melancon. Also his siblings, Chasity Rae Broussard, Dustin Broussard, biological father, Chad M. Broussard, Aunt Tanya, Connie Broussard "Me-Maw," all of Lafayette. He was preceded in death by his grandfather, John Dean Cunningham. Johnny graduated from Eunice High School in 2013 and attended Louisiana Tech University. His intelligence was immeasurable. Johnny was chosen to participate in the statewide Math competition and received 1st place out of the entire state of Louisiana at Southern University in Baton Rouge. Along with his intellect Johnny possessed an incredible soul beyond comprehension for most & seen by few. He adored his son, Mom & brother immensely. Loved by many, understood by few. "Till I see you again...." Trio. View the obituary and guestbook online at www.mourning.com Martin & Castille-SOUTHSIDE-600 E. Farrel Rd., Lafayette, LA 70508, 337-984-2811

Johnathon "Johnny" Broussard , 26, ended his suffering on June 26, 2021 at his home in Lafayette. Survivors include his mother, Virginia "Ginny" Meyers and her husband Craig Joseph, of Lafayette, his son Cam (Caylum Wayne) Broussard and his... View Obituary & Service Information

The family of Johnathon Michael Broussard created this Life Tributes page to make it easy to share your memories.