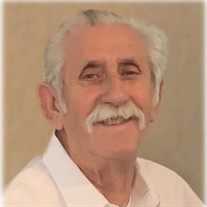 Funeral services will be held on Monday, November 15, 2021 at 12:00 PM in La Chapelle de Martin & Castille for Johnny U. Sonnier, 75, who died on Thursday, November 11, 2021 at his residence in Lafayette surrounded by his family. Interment will be in Broussard Family Cemetery. Deacon Cody Miller will conduct the funeral services. Survivors include his beloved wife of 52 years, Cecilia D. Sonnier; three sons, Bryan Sonnier (Brandi), Shane Sonnier (Claylie) and Michael Sonnier (Patricia); eleven grandchildren, Taylor, Blaine, Camden, Landon Sonnier, Treylin, Rylan, Aislynn, Melanie, Megan, Christin and Hunter Sonnier. He was preceded in death by his parents, Lloyd Sonnier and Aline P. Sonnier. Johnny U. Sonnier was a native and resident of Lafayette, Louisiana. He worked for the City of Lafayette, Lafayette Consolidated Government for over 44 years until his retirement. He loved cooking outdoors with his family, was an avid sports fan and enjoyed watching Westerns and listening to French music. Johnny was a parishioner of St. Leo the Great Catholic Church for many years. He was a loving husband, father and grandfather and will be dearly missed by all who knew and loved him. Pallbearers will be Blaine Sonnier, Ryan Sarkies, Henry Dartez, Chad Dartez, Chris Dartez and Chance Sullivan. Honorary Pallbearers will be Bryan, Shane, Michael, Taylor, Blaine, Camden, Landon, Treylin, Rylan, Aislynn, Melanie, Megan, Christin and Hunter Sonnier. The family requests that visitation be observed in Martin & Castille's DOWNTOWN location on Sunday from 3:00 PM to 9:00 PM and will continue on Monday from 8:00 AM until time of services. A Rosary will be prayed on Sunday at 5:30 PM in Martin & Castille Funeral Home. A heartfelt appreciation is extended by the Sonnier family to the nurses, staff and doctors of Acadian Hospice for their kindness, compassion and loving care given to Mr. Sonnier and his family during their time of need. View the obituary and guestbook online at www.mourning.com Martin & Castille-DOWNTOWN-330 St. Landry St., Lafayette, LA 70506, 337-234-2311

Funeral services will be held on Monday, November 15, 2021 at 12:00 PM in La Chapelle de Martin & Castille for Johnny U. Sonnier, 75, who died on Thursday, November 11, 2021 at his residence in Lafayette surrounded by his family. Interment... View Obituary & Service Information

The family of Johnny U. Sonnier created this Life Tributes page to make it easy to share your memories.

Send flowers to the Sonnier family.