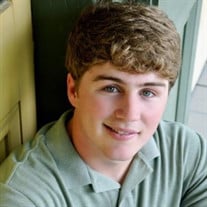 Funeral services will be held on Tuesday, May 11, 2021 at a 2:00 PM Mass of Christian Burial in the Cathedral of St. John the Evangelist in Lafayette for Joseph Oliver LaPrairie, IV, age 28, who passed away on Tuesday, May 4, 2021 in Lafayette. The family requests that visitation be observed in Martin & Castille's DOWNTOWN location on Monday from 4:00 PM to 7:00 PM and will continue on Tuesday from 11:00 AM until time of services. A Rosary will be prayed on Monday at 6:30 PM in the funeral home. Entombment will be in St. John Cemetery Mausoleum in Lafayette. Joe Oliver came into this world on August 25, 1992, during Hurricane Andrew. From there on he was referred to as our “hurricane baby,” fierce and determined. Joe Oliver was a lifelong resident of Lafayette, having attended Ascension Day School, Cathedral-Carmel, St. Thomas More, LSU and graduated from the University of Louisiana. Joe Oliver maintained a deep and abiding faith throughout his life, often attending daily mass. He was rarely seen without his scapular. He led a Christ-centered life, with his daughter Livi Jane and his family at the heart of it. He lovingly and patiently shared his many gifts and talents with his younger cousins. Joe Oliver was a natural athlete. He excelled in every sport he played, but his favorite was football. He achieved legendary status when he caught a touchdown pass in the final minutes of the 2006 Cathedral/Fatima eighth grade football game, giving the Tigers a 12-6 win. He and his Cathedral buddies never let their Fatima friends forget, 12-6! At St. Thomas More, Joe Oliver was a member of the basketball and football teams and again rose to fame as the star running back during the Cougar’s 2010 undefeated season. He was known for his quick wit, his large group of close friends, his competitiveness, his kind soul and sweet smile. After graduation, Joe Oliver became a Tiger again, this time at LSU, where he was a member of Kappa Sigma fraternity. LSU was the perfect choice for Joe Oliver as he grew up tailgating every Saturday with his friends and family. Joe Oliver loved attending music concerts and sporting events, and spending time with family at the beach. Joe Oliver’s passion was coaching. It brought him great joy to help lead the Cathedral-Carmel Tigers to many victories, and in 2018 assist the Notre Dame Pios as they became the state champions. Left to honor and cherish his memory is his beloved daughter, Livi Jane, the light of his life; mother and stepfather, Victoria Moody Valicevic & Chris Valicevic; his father, Joseph Oliver LaPrairie, III; sister, Annie LaPrairie; brother, Jake LaPrairie; stepbrothers, Bryce, Conner, and Evan Valicevic; grandparents, Victoria Harris Moody, Braxton I. Moody, IV, Dr. & Mrs. Joseph Oliver LaPrairie, Jr.; great-grandfather, B.I Moody, III; numerous aunts, uncles, cousins, and friends. He was preceded in death by his great-grandparents, Thelma Hebert Moody, Mary Pernici Harris, Mr. & Mrs. Frank Mulhearn and Dr. & Mrs. J.O. LaPrairie, Sr. and his cousin, William Moody Hensgens. Pallbearers will be Jake LaPrairie, B.J. Gauthier, Thomas Gauthier, Charlie Gauthier, Robert Mark Martina, Braxton Moody, V, Hunter Moody, Tyler Moody, and Jon Adam Town. Honorary pallbearers will be Beau Price, Braxton I Moody, VI, Hunter A. Moody, II, Beau Edward Emory, Joseph Latiolais, Rees Gideon, Samuel Scofield, Damon Moroux, Maxwell Sandlin, Matthew Malagarie, Tyler Haydell, MacKenzie Bourg, Russ Brown, Andrew Broussard, Jace Conrad, Leighton Corrigan, Brandon Monrose, John Singletary, III, and Tristan Moody. Gift bearers will be his cousins, Kempton Moody, Martha Town, Sarah Town, and his aunts, Meredith Moody Emory and Mandy LaPrairie Burgess. Lectors will be his Godparents Molly LaPrairie Town and Braxton I. Moody, V. In lieu of flowers, memorial contributions can be made to Cathedral Carmel School, St. Thomas More High School, or the Miles Perret Cancer Services. Martin & Castille-DOWNTOWN-330 St. Landry St., Lafayette, LA 70506, 337-234-2311

Funeral services will be held on Tuesday, May 11, 2021 at a 2:00 PM Mass of Christian Burial in the Cathedral of St. John the Evangelist in Lafayette for Joseph Oliver LaPrairie, IV, age 28, who passed away on Tuesday, May 4, 2021 in Lafayette.... View Obituary & Service Information

The family of Joseph Oliver LaPrairie, IV created this Life Tributes page to make it easy to share your memories.