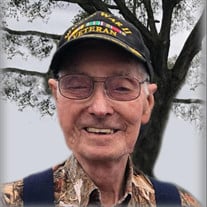 A Mass of Christian Burial will be held for Joseph Bert Miller on Thursday, October 21, 2021 at 10:00 AM at Sts. Peter and Paul Catholic Church in SCOTT. Bert went home to be with the Lord at the age of 92 on Monday, October 18, 2021 at Southwest Louisiana Veterans Home in Jennings, Louisiana. The family requests that visitation be observed in Martin & Castille's SCOTT location on Wednesday, October 20, 2021 from 11:00 AM to 7:00 PM and will continue on Thursday, October 21, 2021 from 8:00 AM until time of services at 10:00 AM. A Rosary will be prayed on Wednesday, October 20, 2021 at 6:00 PM in Martin & Castille Funeral Home of SCOTT. Interment will be held on Thursday, October 21, 2021 at 12:30 PM in Southwest Louisiana Veterans Cemetery in Jennings, Louisiana. Reverend Mark Derise, Pastor of Sts. Peter and Paul Catholic in Scott, will conduct the funeral services. Survivors include his son, John D. Miller and his wife Rose Mary; his son, James D. Miller and his wife Jodi G.; his daughter, Ellen M. Grantham and her husband Eric; his daughter, Lynn M. Gremillion and her husband Bryan; his grandchildren, Benjamin P. Miller, John M. Miller, Joseph M. Miller, Jake Elliot Miller, Quinton James Miller, Meagan Marie Miller, Jonathan Grantham, Bryan Scott Gremillion, Laura Allison Oliver; his great-grandchildren, Cole, Case, William, Ella, John Luke, Marty, Parker, Corben, Fiona, Jefferson, Brooklyn, Luke; his brother, Jerry Gene Miller and his wife, Ursla; his sister-in-law, Jackie D. Miller; his brother-in-law, Ulysses "Bubba" Pitre and his wife Sarah; his sister-in-law, Annie Jean J. Fontenot; and numerous nieces and nephews. He was preceded in death by his beloved wife, Betty Mae Janice Miller who died on February 25, 2021; his parents, Mr. Voohries Miller and Mrs. Rosa Bertha Savant Miller and his great-granchildren, Paul Vincent Miller and Blaire Oliver. Mr. Miller proudly served his country as a member of the United States Navy, serving during World War II and the Korean War as a Seabee. Shortly before his honorable discharge, he met and married the love of his life, Betty and they would then enjoy 70 years of marriage together. After the service, he enrolled in SLI, now known as University of Louisiana at Lafayette. He would later earn a masters degree from LSU. Upon graduating from college, he would begin his career as an educator and would later end his career as an Evangeline Parish School Board Supervisor. Throughout his career of teaching and coaching, Mr. Miller has impacted countless lives and will be deeply missed by so many. Bert as he was affectionately known, was an avid fisherman and hunter. He especially enjoyed hunting with his brother, Jerry. He also enjoyed cooking, woodworking, gardening, traveling with his wife and being with friends. Although Bert had many interests in life, his passion in life was his family. He deeply loved cooking for his family and having family gatherings. Memories of him will be cherished by all who knew him. Pallbearers will be Benjamin Paul Miller, Bryan Scott Gremillion, John Michael Miller, Joseph Mark Miller, Jonathan Grantham, Jake Elliot Miller, and Quinton James Miller. Memorial contributions can be made in Mr. Joseph Bert Miller's name to the Wounded Warrior Project, https://support.woundedwarriorproject.org, 4899 Belfort Road Suite 300, Jacksonville, FL 32256 also you can make your check payable to Veterans Recreational Fund and mail to Southwest Louisiana Veterans Home, 1610 Evangeline Rd, Jennings, LA 70546. A heartfelt appreciation is extended by the Miller family to all the Doctors, nurses and staff at Ochsner Lafayette General Medical Center, Lafayette Physical Rehab Hospital and to Amedisys Hospice of Lake Charles. Also a very special thanks to Southwest Louisiana Veterans Home for the compassionate care given to Mr. Bert during his time of need. View the obituary and guestbook online at www.mourning.com Martin & Castille-SCOTT-802 Alfred St., Scott, LA 70583, 337-234-2320

A Mass of Christian Burial will be held for Joseph Bert Miller on Thursday, October 21, 2021 at 10:00 AM at Sts. Peter and Paul Catholic Church in SCOTT. Bert went home to be with the Lord at the age of 92 on Monday, October 18, 2021 at Southwest... View Obituary & Service Information

The family of Joseph Bert Miller created this Life Tributes page to make it easy to share your memories.

A Mass of Christian Burial will be held for Joseph Bert Miller...

Send flowers to the Miller family.