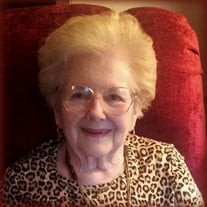 Julie Seabough, age 87, passed away the afternoon of Monday June 7, 2021, in the presence of family. Julie was born in Gallatin, a small town in northwest Missouri; the daughter of Marshall and Mabel Lee Wimber. She grew up around the family beauty salon, riding horses and dressing the family cat in her own baby clothes. Julie was her class Salutatorian and on June 8, 1952, she married her high school sweetheart, Bill Seabough. Following Bill’s tour in the military, Julie and Bill moved to Springfield, Missouri where they had three children. In 1970 they moved to Lafayette, Louisiana where they became small business owners and an integral part of the community. Much of Julie’s life was centered around her family, her faith, and her love for animals. Julie and Bill raised three children; Robert, Lisa, and Candi. She was a devoted Christian, treasuring her daily scriptures where she found guidance and solace. Julie’s lifetime love for animals led to her career as owner of a dog grooming and kennel business. She also bred and trained dogs, including 25 miniature poodle champions. There was always at least one family dog around the house; and in her final years, some well stocked bird feeders. Julie was preceded in death by her husband Bill and is survived by her three children; Robert Seabough and wife Kay, Lisa Hankla and husband David, and Candi McGonagill and husband Michael; and grandchildren Gina Hooper, Lisa Myers, Andrew Seabough, Peter Hankla, Molly Hankla, Colin McGonagill, and Patrick McGonagill; and great grandchildren Matthew and Daniel Myers, and Mac and Chelsea Hooper. The family expresses their heartfelt appreciation to Julie’s caregivers, friends and neighbors along with the attentive and loving staff at Pelican Pointe Rehabilitation in Maurice, Rosewood Assisted Living in Lafayette, and Traditions Hospice of Lafayette. A gathering of friends and family will be held at a future date. The family requests that, if desired, memorial gifts be made to Traditions Health, 217 Rue Louis XIV, Suite 100, Lafayette, LA. 70508. View the obituary and guestbook online at www.mourning.com Martin & Castille-SOUTHSIDE-600 E. Farrel Rd., Lafayette, LA 70508, 337-984-2811

Julie Seabough, age 87, passed away the afternoon of Monday June 7, 2021, in the presence of family. Julie was born in Gallatin, a small town in northwest Missouri; the daughter of Marshall and Mabel Lee Wimber. She grew up around the family... View Obituary & Service Information

The family of Julie Ann Seabough created this Life Tributes page to make it easy to share your memories.

Julie Seabough, age 87, passed away the afternoon of Monday June...

Send flowers to the Seabough family.