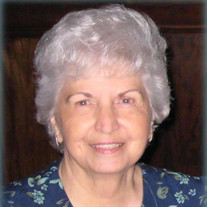 June Peterson Phillips was born in Loa, Utah on May 5, 1929. Her race of life started in a small town in South Central Utah and continued for 92 years and 9 days on May 14, 2021. She is survived by four daughters, Vicki Hoosier of Holly Springs, NC, Dianne Phillips Clark of Abbeville, LA, Melanie Phillips Crawford of Houston, TX and Mary Phillips Menesses (Todd) of Independence, KS; six sons, Rodney Wayne Keely (Dianne) of Darby, MT, Gary Mark Keely of McKenzie Bridge, OR, Stanley Boyd Keely (Pam) of Fountain Hill, AR, William Riley Phillips, III (Wendy) of Lafayette, LA and Jack Clayton Phillips (Janet) of Youngsville, LA; twenty-nine grandchildren; fifty-four great grandchildren; and twelve great-great grandchildren. She is also survived by other relatives and friends. She was preceded in death by her husband, William Riley Phillips, Jr.; her parents, Thomas Jerid Peterson and Margaret Elen Taylor Peterson of Utah; twelve brothers and sisters; and one son, Henry Jerome Phillips. The events in her life led her through many states, towns, jobs and circumstances. Some good times and some bad times, but all were dictated by choices whether good or bad, right or wrong. For 92 years she continued running her race that came to an end at her home on a Friday afternoon surrounded by her family members that she loved so much. Always being a very independent lady, she ended up needing help as her earthly body began to wear out. She had many accomplishments in her life, with the greatest being a great grandmother, grandmother, friend, and caring person. She was once known as a fierce competitor in the Rodeo circuits, winning several Barrel Racing Championships across Texas and Louisiana. Surviving stiff competition, nasty falls, and one that left her with a bent belt buckle that saved her when she was stepped on. Continuing on until time began sneaking up on her as it does with all of us. Always being a peacemaker and gentle person, not only by her speech but also by her actions. Retiring with 26 years of work with the Bell System, she and her husband, Bill, moved back to Lafayette in 1982. She continued in a servant’s role with great hospitality and always caring for others, feeding missionaries, transporting friends to doctor’s appointments, having an ear for those struggling with problems and always ready to do whatever she could to help. After a 2-year battle with Non-Hodgkins Lymphoma and surviving Covid she began to decline. As she declined, she was encouraged and taken care of by family members but still always trying to do for others. She succumbed to her inevitable appointed time of death. She will forever be missed and remembered by all those who knew her. Loved forever by her family and friends. She is deeply missed. Funeral services will be held on Saturday, May 22, 2021 at 10:00 AM in The Church of Jesus Christ of Latter-Day Saints. Bishop Ryan Nelson, Bishop of the Lafayette Ward of the Church of Jesus Christ of Latter-Day Saints, will officiate the services. Visitation will be held at The Church of Jesus Christ of Latter-Day Saints on Saturday from 9:30 AM until time of the services. Pallbearers will be Stan Keely, Damon Keely, Derek Keely, Wayne Keely, Justin Leslie, Shay Hoosier and Taylor Phillips. View the obituary and guestbook online at www.mourning.com Martin & Castille Funeral Home - DOWNTOWN, 330 St. Landry Street Lafayette, Louisiana 70506 337-234-2311

June Peterson Phillips was born in Loa, Utah on May 5, 1929. Her race of life started in a small town in South Central Utah and continued for 92 years and 9 days on May 14, 2021. She is survived by four daughters, Vicki Hoosier of Holly Springs,... View Obituary & Service Information

The family of June Peterson Phillips created this Life Tributes page to make it easy to share your memories.

Send flowers to the Phillips family.