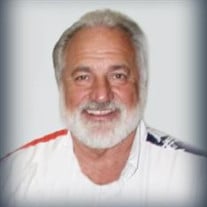 A Mass of Christian Burial will be held for Kelvin James Boyer at 11:00 AM on Friday, November 12, 2021 at Assumption of the Blessed Virgin Mary Catholic Church in Mire, 6080 Mire Hwy, Church Point, LA 70525. Kelvin was 59 when he went home to be with the Lord on Sunday, November 7, 2021 at Unity Point Health - Iowa Lutheran Hospital in Des Moines, Iowa. The family requests that visitation be observed at Martin & Castille Funeral Home, 330 St. Landry Street, Lafayette, LA 70506 on Thursday, November 11, 2021 from 5:00 PM until 8:00 PM with a recitation of the Rosary at 6:00 PM. Visitation will resume on Friday, November 12, 2021 from 8:00 AM until time of services. Interment will be in Assumption Blessed Virgin Mary Cemetery in Mire, Louisiana. Very Reverend Monsignor Russell Harrington, VE, Pastor of Assumption of the Blessed Virgin Mary Catholic Church in Mire, will conduct the funeral services. A native of Lafayette and resident of Rayne, Kelvin touched the lives of many, both in his professional career and in his personal life. His proudest accomplishment was being owner/operator of B.E.S.T. (Boyer's Equipment Services & Technology); however, his proudest title came from his grandchildren, who called him "Sweets". Kelvin was outgoing and never met a stranger. Many would say he had a heart of gold and would give anyone the shirt off of his back. Some of his hobbies included hunting, fishing and playing cards. Although Kelvin had many interests in life, his passion in life was providing for his family. He will be deeply missed and memories of him will be cherished by all who knew him. Survivors include his daughter, Skye Boyer Bourgeois and her husband, Scott; his son, Kelvin "Kelby" James Boyer II; the love of his life, Monica Boyer; his sisters, Pauline Breaux and her husband, Doyle, Sonya Wells and her husband, William, and Lucy Savoie; his brothers, Danny Boyer and his wife, Tina, Ronald "Radar" Boyer and his wife, Glenda, and Brian Boyer, and his grandchildren, Lyla, Audrey and Brooks Bourgeois and numerous god-children, nieces and nephews. Kelvin was preceded in death by his father and mother, Paul and Sylvia "Boo" Arceneaux Boyer; his brothers, Kenny and Billy Boyer. Pallbearers will be Ken Lejeune, Randall Breaux, Christopher Breaux, Brady Boyer, Jeremy Boyer, and Joby Boyer. Honorary Pallbearers will be William Wells, Doyle Breaux and Rene Savoie. Memorial contributions can be made in Kelvin James Boyer's name to the Carmelite Monastery, 1250 Carmel Drive, Lafayette, LA 70501. A heartfelt appreciation is extended by the Boyer family to Unity Point Health - Iowa Lutheran Hospital in Des Moines, Iowa for the compassionate care given to Kelvin. Also a heartfelt appreciation to all for the thoughts, prayers and support shared with the family throughout his illness. View the obituary and guestbook online at www.mourning.com Martin & Castille-DOWNTOWN-330 St. Landry St., Lafayette, LA 70506, 337-234-2311

A Mass of Christian Burial will be held for Kelvin James Boyer at 11:00 AM on Friday, November 12, 2021 at Assumption of the Blessed Virgin Mary Catholic Church in Mire, 6080 Mire Hwy, Church Point, LA 70525. Kelvin was 59 when he went home... View Obituary & Service Information

The family of Kelvin James Boyer created this Life Tributes page to make it easy to share your memories.

A Mass of Christian Burial will be held for Kelvin James Boyer...

Send flowers to the Boyer family.