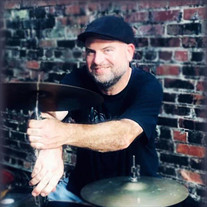 A Mass of Christian Burial will be held on Saturday, March 12, 2022 at 10:30 AM at St. Mary Mother of the Church in Lafayette for Kevin Patrick O'Day, 48, who died on Tuesday, March 8, 2022 in New Orleans, Louisiana. Interment will be in St. John Cemetery. Reverend Cedric Sonnier, Pastor of St. Mary Mother of the Church, in Lafayette will be the Celebrant of the Mass. Survivors include his son, Luke Evan O’Day and Luke’s mother Julie Lodato, both of New Orleans, his parents, Don and Gerry Hooper O'Day of Lafayette; one brother, Ryan O’Day and his wife Jami of Manvel, Texas; paternal grandmother, Louise O’Day of Houston, Texas; girlfriend, Whitney Alouisious Sanders of New Orleans; five nieces and nephews, Emma, Audrey, Jackson, Ruby, and Asher O’Day of Manvel, Texas; two uncles, Garland O’Day and his wife Eva of Belarus and Jeff Hooper III of Hawaii; one aunt, Carolyn Norton and her husband Tom of Houston, Texas. He was preceded in death by maternal grandparents, Jeff and Yvonne Andrepont Hooper; paternal grandfather, Edwin O’Day. Kevin graduated from Catholic High of Baton Rouge in 1991, Loyola University in 2001, and received his MBA from the University of Louisiana at Lafayette in 2003. Kevin was an incredible musician and the backbone for many groups in New Orleans. He was a kind man with a joyous sprit. He generously shared his skills and helped many other musicians in their careers. He was constantly supportive and encouraging of others. Countless stories describing how he helped others are posted online. He had a warm heart and his friendly eyes that penetrated deeply. When he played, his pure joy radiated and touched everyone in the audience. Kevin performed and recorded with many groups including: SAPP, Royal Finger Bowl, All That, Iris May Tango, Anders Osborne, Brokedown StreetCar, Midnite Disturbers, Professors of Pleasure, Mustache Petting Zoo, Have Soul Will Travel, Michael Ray and the Cosmic Krewe, New Orleans Klezmer Allstars, Lynn Drury, Bonerama, Kirk Joseph’s Backyard Groove, Walter “Wolfman” Washington, Kevin O’Day and the Live Animals, and numerous others. Pallbearers will be Luke Evan O’Day, Ryan O’Day, Chris Senac, Rob Davis, Gene Harding, and Frank Lodato. Honorary Pallbearers will be Stanton Moore and Kirk Joseph who were both touring and unable to attend. A Celebration of Life event will also be held at Tipitina's in New Orleans on Monday, March 14th at 5:00 PM. All are invited to attend and share uplifting stories about Kevin. Memorial contributions can be made in Kevin's name to Recording Academy Musicares, 3030 Olympic Blvd. Santa Monica, CA 90404 or New Orleans Musicians’ Clinic, 1525 Louisiana Ave., New Orleans, Louisiana. View the obituary and guestbook online at www.mourning.com Martin & Castille-DOWNTOWN-330 St. Landry St., Lafayette, LA 70506, 337-234-2311

A Mass of Christian Burial will be held on Saturday, March 12, 2022 at 10:30 AM at St. Mary Mother of the Church in Lafayette for Kevin Patrick O'Day, 48, who died on Tuesday, March 8, 2022 in New Orleans, Louisiana. Interment will be in St.... View Obituary & Service Information

The family of Kevin Patrick O'Day created this Life Tributes page to make it easy to share your memories.

A Mass of Christian Burial will be held on Saturday, March 12,...

Send flowers to the O'Day family.