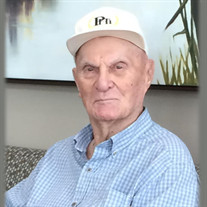 The Jambon family announces the passing of the patriarch of the family, Mr. Larry Jambon. A Celebration of Life Visitation will be held on Saturday, November 13, 2021 from 10:00 AM until 1:00 PM at Martin and Castille Funeral Home, 600 E. Farrell Road, Lafayette, LA 70508. Larry Jambon was born on May 9, 1926 in Galliano, Louisiana, the first of two children to Reno Jambon and Victoria Pitre Jambon. Larry was taken out of school at 13 to help support his family. He worked for a while at a syrup factory in New Orleans. Later he worked for his father's shrimp net making business. He enlisted in the U.S. Army on June 23, 1944, and was inducted into the Army on July 11, 1944. Trained as a light artillery gun crewman on a 105mm howitzer, he also served as an interpreter of French and, after learning the language, German. He served his country in WW2 in France and Germany until June 23, 1946. After the war he returned to Galliano, Louisiana. On a trip to Lafayette, he decided to look up one of his war buddies and met and married his friend's sister, Eugenie "Jane" Broussard, to whom he had been writing during the war. Larry and Jane lived in Galliano with their children until 1960, when they moved to Youngsville, LA (Jane's home town). Larry worked as a boat captain for many years and had his own shrimp net shop in Youngsville. He retired from the oilfield around 1976 and worked full time in his shop. His children worked for him for several years to earn spending money. Larry continued working in his net shop until the age of 83 when his hands could no longer do the work. Larry made swings, monkey bridges, toys, zip lines, puzzles, boats, pretend weapons, among many other fun things to keep his children and grandchildren entertained. His family and friends have memorabilia he has made: step stools, "reach" sticks, note pads, mail slots, miniature Acadian homes, desks, and pencil sketches. Larry was a lifelong learner, mentor, and man of his word. He loved to read, write, and tell stories. Larry is preceded in death by his loving wife of almost 60 years, Eugenie "Jane" Broussard; his father, Reno and his mother, Victoria as well as his sibling Ernest and his sons, Alan and Michael. Larry is survived by his children, Judy (Lynn), Teena (Wade), Kieron (Linda), Alan's wife, Laura and Michael's wife, Lil. He is also survived by 9 grandchildren, 13 great grandchildren, and 7 great-great grandchildren. In lieu of flowers, donations can be made in Mr. Jambon's name to Hospice of Acadiana, 2600 Johnston St Suite 200, Lafayette, LA 70503. View the obituary and guestbook online at www.mourning.com Martin & Castille-SOUTHSIDE-600 E. Farrel Rd., Lafayette, LA 70508, 337-984-2811

The Jambon family announces the passing of the patriarch of the family, Mr. Larry Jambon. A Celebration of Life Visitation will be held on Saturday, November 13, 2021 from 10:00 AM until 1:00 PM at Martin and Castille Funeral Home, 600 E. Farrell... View Obituary & Service Information

The family of Larry P. Jambon created this Life Tributes page to make it easy to share your memories.

The Jambon family announces the passing of the patriarch of the...

Send flowers to the Jambon family.