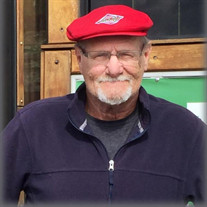 Funeral services will be held on Saturday, April 17, 2021, at a 10:00 AM Mass of Christian Burial in St. Alphonsus Catholic Church in Maurice for Larry James Simon, 67, who died Tuesday, April 13, 2021 at his residence in Lafayette. The family will receive guests at Martin & Castille's SOUTHSIDE location on Friday from 4:00 PM to 8:00 PM with a recitation of the Rosary at 7:00 PM. Visiting will resume on Saturday from 8:00 AM until time of service. Inurnment will be in St. Alphonsus Cemetery at a later date. Reverend Father Korey LaVergne, Parochial Vicar, Our Lady of Fatima Roman Catholic Church, will officiate the funeral Mass and will conduct the funeral service. Larry is survived by his mother, Mrs. Verna Mae Trahan Simon of Lafayette; his loving wife of 43 years, Gwendolyn David Simon of Lafayette; two sons, Ryan Simon and his wife Denise of Lafayette, and Drew Simon and his wife Jenny of Duson; two sisters, Barbara Landry of Duson, and Brenda Campbell and her husband Don of Perryville, AR; and one brother, Darrell Simon and his wife, Gwen of Lafayette. Mr. Simon is also survived by his 5 grandchildren, Camille, Audrey, Lucy, Vivienne, and his hero, Jean-Paul Simon. He acknowledged his grandchildren as the five reasons for surviving his cancer for 7 ½ years. He was preceded in death by his father, Loland Simon; his brother, Fred Allen Simon; and four grandchildren, Louis, Emile, Cecile Simon, and baby Simon. Mr. Simon was born in Abbeville, Louisiana, on August 15, 1953 and grew up in Maurice, LA with his parents, his brothers and sisters, his aunts and his grandfather. He grew up picking cotton, milking cows, watching cartoons and playing basketball and baseball. He received a scholarship to USL in 1971 and played baseball for the Bulldogs. He would go on to work many jobs in the transportation industry in the 1970s, and then helped to establish Ace Transportation in 1983 and became a pivotal leader in the largest privately owned organization in Lafayette throughout the years. After 40 years, he retired and continued to consult in the transportation and logistics industry. Larry loved to be at home with his wife, his children and his grandchildren; cooking gumbo, gardening, listening to KBON and his sons play Cajun music, and traveling in the WOO camper. Larry especially loved great Simon family gatherings and reunions with his extended family, much the way his father and grandfather had for so many years. Pallbearers will be Ryan Simon, Drew Simon, Jean-Paul Simon, Mike David, Alan Bourgeois, and Darrell Simon. Honorary pallbearer will be Don Campbell. A special thanks to Martin and Castille Funeral Home, St. Alphonsus Catholic Church, Dr. Eugene Brierre and Eric Buller, PA, the staff of Lourdes Oncology Associates, and to Our Lady of Fatima Roman Catholic Church. View the obituary and guestbook online at www.mourning.com Martin & Castille-SOUTHSIDE-600 E. Farrel Rd., Lafayette, LA 70508, 337-984-2811

Funeral services will be held on Saturday, April 17, 2021, at a 10:00 AM Mass of Christian Burial in St. Alphonsus Catholic Church in Maurice for Larry James Simon, 67, who died Tuesday, April 13, 2021 at his residence in Lafayette. The family... View Obituary & Service Information

The family of Larry James Simon created this Life Tributes page to make it easy to share your memories.

Send flowers to the Simon family.