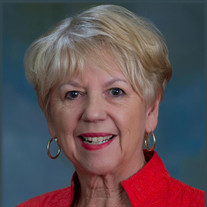 LAFAYETTE - Funeral Services will be held Saturday at 11:00 a.m., March 19, 2022, with a Mass of Christian Burial in St Pius X Catholic Church for Lora Lee Venable Moreau, 81, who passed away Monday after a courageous fight with pancreatic cancer. Interment will be in Lafayette Memorial Park, 2111 West Pinhook Road. Reverend James Brady, JCL, will be the Celebrant of the funeral Mass. Survivors include her son, Andre’ and his wife Angie Bradley Moreau of Lafayette; her 3 grandchildren, Tyler, Camille, and Joel Moreau; 2 great grandchildren, Harper and Melanie Moreau; one sister, Mona Mouton (Billy) of Lafayette, and two brothers, Ray Venable (Judy) and Jimmy Venable (Mona), both of Lawtell, Louisiana. She was preceded in death by her husband Jim, her son, Jeff Moreau, and by her parents, Isaac and Helen Venable of Lawtell. Lora was a very well respected leader in the state’s beauty industry with a career spanning 60 years. Her background includes being the owner and operator of several successful salons including Hair-A-Fair and Lora’s Hair Designs, lecturer, retailer and television beauty consultant. She’s best known as the founder of the Cosmetology Training Center (CTC) which has been training students in Acadiana since 1983. Lora also served many different leadership roles within La. Association of Cosmetology Schools and was appointed by Gov. Jindal to serve as a member of the La. State Board of Cosmetology which oversees the state’s beauty industry. Lora’s love for the cosmetology field and her caring attitude for her students and staff is reflected in the success of the thousands of graduates who are working all over Acadiana. She was passionate about ensuring her graduates were both fundamentally sound and understand what it takes to be a true professional. Lora was a great role model and mentor for her students and instructors she trained over the past 40 years. She always led by example and her strong faith was reflected in everything she did, earning her the respect of her students and colleagues. Lora was a leader in the local Charismatic Catholic movement and a long-time member of the Immaculata Prayer Group. She also had a passion for travel and attended all of the big hair shows in Paris, London, and New York as well as going on several pilgrimages to Europe. Her grandchildren knew her as “Lora the Explorer”! Lora grew up on a small farm in Lawtell, La. She married her high school sweetheart, Jim, who was taken from her way too soon. They were a fun-loving couple who lived a full life of travel and adventure. She also lost her son in a tragic auto accident which allowed her to lean deeper into her faith. We delight in the fact that they are all reunited in heaven. She was especially devoted to her grandchildren, spoiling them with much love and attention. She was an amazing and strong woman who leaves a remarkable legacy as a true Steel Magnolia. Lora will be deeply missed but will certainly never be forgotten. Martin & Castille Funeral Home (Southside) is in charge of all funeral arrangements. The family requests that visiting hours be observed Saturday morning from 8:00 to time of service with a rosary at 9:30 am. Pallbearers will be Joel Moreau, Tyler Moreau, Ben Mouton, Raphael Venable, A.J. Venable, and Josh Venable. The family asks that in lieu of flowers, donations be made to the Charlene Richard Orphanage in Thailand: 307 Keeney Ave, Lafayette, LA 70501. The family would also like to thank everyone for their prayers and support over the past 2 years with special thanks to her sitters, physicians, and staff at Hospice of Acadiana for their kind and compassionate care. View the obituary and guestbook online at www.mourning.com Martin & Castille-SOUTHSIDE-600 E. Farrel Rd., Lafayette, LA 70508, 337-984-2811

LAFAYETTE - Funeral Services will be held Saturday at 11:00 a.m., March 19, 2022, with a Mass of Christian Burial in St Pius X Catholic Church for Lora Lee Venable Moreau, 81, who passed away Monday after a courageous fight with pancreatic cancer.... View Obituary & Service Information

The family of Lora Lee Moreau created this Life Tributes page to make it easy to share your memories.

Send flowers to the Moreau family.