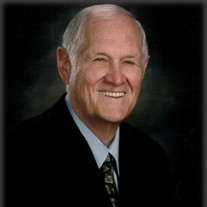 Funeral services will be held on Tuesday, September 29, 2020, at 11:00 AM in La Chapelle de Martin & Castille for Louis Woodson, 96, who passed away peacefully of natural causes on Saturday, September 26, 2020, at his residence. Entombment will be in St. John Cemetery Mausoleum in Lafayette. Rev. John Gale "Buddy" Breaux will officiate, assisted by Rev. Msgr. Keith J. DeRouen and Rev. Msgr. W. Curtis Mallet, JCL. Mrs. Jodi Bollich and Mr. Dave Domingue, vocalists, will sing "Pie Jesu," "My Shepherd Is The Lord," "Ave Maria," "Panis Angelicus" and "Battle Hymn of the Republic" accompanied on the organ by Mr. Kevin Martin, violin by Mrs. Lauren Baker, and trumpet by Will Green. Louis was a native of Leonville and a resident of Lafayette for a majority of his life. When the United States entered World War II, he was an engineering student at Southwestern Louisiana Institute (SLI), now the University of Louisiana at Lafayette. He enlisted in the U.S. Navy in 1944 and proudly served as a radar technician on the U.S.S. Wichita. After seeing action in Okinawa, the Wichita led the U.S. task group into Nagasaki Bay with the mission of rescuing Allied prisoners of war. Following the war, he returned to Louisiana and married his sweetheart Georgia Zeringue. Graduating in 1947 from SLI with a degree in mechanical engineering, Louis began his long and successful career in the oil and gas industry. In 1965 he founded the Woodson Companies, specializing in inland waterway, marsh, and swamp pipeline construction. The companies were instrumental in the installation of significant pipelines throughout the Gulf Coast region including those of several U.S. Strategic Petroleum Reserve facilities. Louis was not only a business leader; he was also active in the community, serving on numerous boards and committees. Additionally, he was particularly dedicated to the Discalced Carmelites of Lafayette. Having a true entrepreneurial spirit, Louis embodied the American Dream. While his accomplishments were legion, at his core, he was a simple man who loved God and family. He will be deeply missed. Survivors include his three daughters, Linda W. Doherty and her husband, Mike Doherty, Cheryl W. Hendry and her husband, Dr. John Hendry, and Paula W. Blanchet and her husband, Judge David Blanchet, all of Lafayette; one grandchild, Michelle Woodson Blanchet; and one step grandchild, George Jason Doherty. He was preceded in death by his beloved wife of 63 years, Georgia Zeringue Woodson, his parents, George Woodson and Simonia Carriere Woodson, and his sister, Alberta Woodson Guinn. The family requests that visitation be observed on Tuesday, September 29, 2020, from 9:00 AM until time of services. Pallbearers will be Mike Doherty, Dr. John Hendry, Judge David Blanchet, Louis Ledet, Steve Sansom, and Jim Hendry. Memorial contributions may be made to: the Carmelite Monastery, 1250 Carmel Drive, Lafayette, LA 70501 or Miles Perret Cancer Services, 2130 Kaliste Saloom Rd., Suite 200, Lafayette, LA 70508. A heartfelt appreciation is extended by the Woodson family to Dr. Ken McCarron. The family would also like to give thanks to Louis’ faithful caregivers: Bryan Hebert, Alan Davis, Kenneth Guidry, Jenny Sathre, and his longtime, dedicated housekeeper Becky Leger. Their loving care was beyond measure. View the obituary and guestbook online at www.mourning.com Martin & Castille-DOWNTOWN-330 St. Landry St., Lafayette, LA 70506, 337-234-2311

Funeral services will be held on Tuesday, September 29, 2020, at 11:00 AM in La Chapelle de Martin & Castille for Louis Woodson, 96, who passed away peacefully of natural causes on Saturday, September 26, 2020, at his residence. Entombment... View Obituary & Service Information

The family of Louis Woodson created this Life Tributes page to make it easy to share your memories.

Send flowers to the Woodson family.