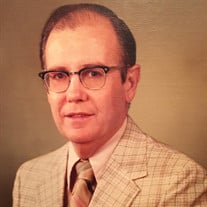 Funeral services will be held on Wednesday, October 14, 2015 at a 3:00 PM Mass of Christian Burial in La Chapelle de Martin & Castille for Magruder Goldman "Mac" Hays, age 88, who died at 10:30 AM on Sunday, October 11, 2015 at his residence in Lafayette. Interment will be in Greenlawn Memorial Gardens. Reverend Howard Blessing, Pastor of Holy Cross Catholic Church in Lafayette, will be the Celebrant of the Funeral Mass and will conduct the funeral services. Lectors and Giftbearers will be his granddaughters. Musical Selections will be, "On Eagles' Wings", "How Great Thou Art", "Amazing Grace" and "Ave Maria" (Shubert). Survivors include his wife, Madeline Lazarus Hays of Lafayette; two daughters, Mary Elizabeth Hays and her husband Tim Bennett, Susan Eleanor Wallace and her husband Greg; five sons, William Magruder Hays and his wife Deedy, Robert Bruin Hays and his wife Jan, Thomas Leon Hays and his wife, Karren, David Swayze Hays and his wife, Jon-Ella and John Patout Hays and his wife, Michelle; Nineteen grandchildren, Simon, Megan, Lily, Benjamin, Kathryn, Alex, Sawyer, Sarah Joy, Rosalie, Kristofer, Matheau, Peter, Laura, Mary, Jack, Madeline, Theresa, Michael Magruder and Anna; ten great grandchildren, Wesley, Julianne, Madison, Mollie, Samuel, Ava, Roman, Henry, Mary-Ann and Magruder; and one brother, Peter B. Hays Jr. and his wife, Jerry. He was preceded in death by his parents; his step-mother, Martha Davis Hays; his sisters, Elizabeth Hazlip, Martha Frances Smith and Corinne Talbert and a granddaughter, Eleanor Hays Bennett. Magruder Goldman "Mac" Hays was born in Baton Rouge, Louisiana on July 24, 1927. He married Madeline Lazarus on June 10, 1951 on a stormy day at Our Lady of Mount Carmel Catholic Church in St. Francisville, LA. He was the son of Peter Bruin Hays, Sr. and the former Mary Patout Wall Hays (grand-daughter of M.A. Patout). He is a descendant of Peter Bryan Bruin, who was an officer in the Revolutionary War and for whom Lake Bruin is named. He is also a descendant of the MA Patout Family and raised on a farm in Waterproof, Louisiana. Mr. Hays was a graduate of Waterproof High School and a member of the 1943 Louisiana Class B State Championship Football Team. When it was time for college he wanted to major in agriculture. His father told him he didn't need college for that because he would teach him everything he knew about farming. Mac really wanted to go to college so he decided to try engineering because he was good at math. He left home to attend Tulane where he was awarded a Legislative Scholarship. He interrupted his college education at the age of 18 in 1945 to join the United States Navy during WWII. He finished boot camp on VJ day 8/14/45, which was the official end of WWII. He loved to say "the Japanese quit because they heard he was coming". He received an honorable discharge. Mac earned a degree in Electrical Engineering. After graduation he went to work for Lighting Fixture & Electric Supply. At the age of 34 he founded Teche Electric Supply in 1962, which he managed until his retirement. He loved to give people nicknames. He gave $2 bills to kids and for tips, and was questioned about them being counterfeit often. Known for his trademark miniature sized business cards that read "The lack of orders from you has made this economy size card necessary". He met Madeline while swimming at Lake St. John. His hobbies included working, reading, and dancing. He was an active member of the See Saws Square Dance Club for many years. He enjoyed his camp on Lake Arthur. He was a longtime member of Our Lady of Fatima Catholic Church, Southwest National Bank Board of Directors, Lafayette Electrical Contractors Association gave him the Ben Roy Award, Acadiana Electrical Assoc which presented him the Pioneer Award, Carencro War Veterans, Lafayette Chamber of Commerce Board of Directors 1984, Lake Arthur Yacht Club and Alpha Tau Omega Fraternity at Tulane. He was a proud member of the NRA. Memorial contributions and donations may be made to UL Foundation for the Mac Hays/Teche Electric Endowed Scholarship in Electrical Engineering, 705 East St. Mary Blvd., Lafayette, LA 70503. Pallbearers will be his nine grandsons. Honorary Pallbearers will be Mike Clark, Dean Guidry, Pete Hays, Donnie DeRouen and Tho Le. The family requests that visitation be observed in Martin & Castille's DOWNTOWN location on Tuesday from 3:00 PM to 9:00 PM and on Wednesday from 9:00 AM until time of service. A Rosary will be prayed by Brady LeBlanc on Tuesday at 6:30 PM in Martin & Castille Funeral Home. The family would like to express their sincere appreciation to the caregivers, Kendra Potier, Desiree Potier, Dalana Pomier, Stacie Brown, Sherrell Brown and Hospice of Acadiana for their compassionate care. The Hays family would like to thank the Teche Electric Family (its employees, customers and suppliers) for their support. View the obituary and guestbook online at www.mourning.com Martin & Castille-DOWNTOWN-330 St. Landry St., Lafayette, LA 70506, 337-234-2311

The family of Magruder G. "Mac" Hays created this Life Tributes page to make it easy to share your memories.

Send flowers to the Hays family.