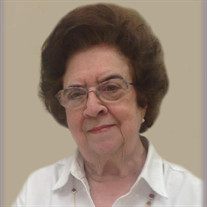 Funeral Services will be held on Friday, March 4, 2022 at 1:00 PM in Martin & Castille’s La Fleur de Lis Chapel in Lafayette, for Maisie Bird Barra, 88, who passed away on Sunday, February 27, 2022. The family requests that visitation be observed in Martin & Castille’s Southside location on Friday from 11:00 am until time of services. Interment will be in Calvary Cemetery in Lafayette. Reverend Howard Blessing will conduct the funeral services. Survivors include her husband of 67 years, Richard J. Barra; brother, Edward A Bird, III; her children, Karin Broussard and her husband Leon, Megan Barra, Marc Barra and his wife Michelle, Dreux Barra and his wife Monique, Lorin Montgomery and her husband Richard, her seven grandchildren, Albert Barra, Andree’ Barra, Brennan Broussard, Riley Montgomery, Camille Barra, Anna Montgomery, and Elizabeth Barra; and friend, Sonny Landreth. She was preceded in death by her parents, Edward Abraham Bird, Jr. and the former Maisie Blanchard; her sisters Barbara Richard and Diane Verbois; and her son Scott Wilson Barra. Maisie Bird Barra was born and raised in Baton Rouge, Louisiana and made Lafayette her home. Before becoming a stay-at-home mother raising 6 children, she attended LSU and was President of the Women Off-Campus organization which she started to bring this special group of women's issues to the administration. While in school, she worked at the Louisiana State Capital in Legal Aid Services helping people find legal assistance. At LSU she studied art and costume design and continued to apply this creative approach to her life as a mom and as a teacher. She taught art at Mount Carmel Elementary and at Cathedral High School. Alongside her husband Richard Barra, she formed a public relations firm, Dick Barra & Company. Maisie always loved meeting people, dancing, and was known for her great sense of humor. She was a loving wife, a devoted mother, grandmother, sister, and friend to all and will be dearly missed. Pallbearers will be Marc Barra, Dreux Barra, Leon Broussard, Brennan Broussard, Richard Montgomery, Ned Bird, and Jack Verbois. Honorary Pallbearers will be her grandson, Albert Barra, and her godchild, Patrick Richard. A heartfelt appreciation is extended by the Barra family to her caregivers Denise Prejean, Kasha St. Julien, and Iesha St. Julien, and to Hospice of Acadiana. View the obituary and guestbook online at www.mourning.com Martin & Castille-SOUTHSIDE-600 E. Farrel Rd., Lafayette, LA 70508, 337-984-2811

Funeral Services will be held on Friday, March 4, 2022 at 1:00 PM in Martin & Castille&#8217;s La Fleur de Lis Chapel in Lafayette, for Maisie Bird Barra, 88, who passed away on Sunday, February 27, 2022. The family requests that visitation... View Obituary & Service Information

The family of Maisie Bird Barra created this Life Tributes page to make it easy to share your memories.

Send flowers to the Barra family.