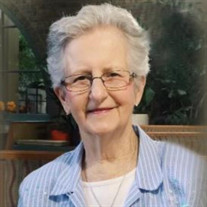 Funeral services will be held on Monday, February 28, 2022 at a 12:30 PM Mass of Christian Burial in St. Mary Mother of the Church in Lafayette, for Marjorie "Margie" Landry LeBlanc, 89, who peacefully passed away on Thursday, February 24, 2022 at her residence in Lafayette. Interment will be in St. John Cemetery. Very Reverend Monsignor W. Curtis Mallet, JCL, Vicar General of the Diocese of Lafayette will officiate as Celebrant of the Mass and conduct the funeral services with Con-celebrants Reverend Cedric Sonnier of St. Mary Mother of the Church and Reverend Gregory P. Chauvin of St. Jules Catholic Church, who is her great-nephew, with Homilist, Reverend Hampton Davis, Pastor of St. Anthony Padua Catholic Church in Eunice. The family requests that visitation be observed in Martin & Castille's DOWNTOWN location 330 St. Landry St., Lafayette, LA 70506 on Sunday, February 27 from 3:00 PM to 7:00 PM with a rosary recited by her grandchildren, great-grandchildren and her Theresian sisters at 6:00 PM. Visitation on Monday will be observed in the funeral home from 9:00 AM until time of services. Survivors include her daughters, Mary LeBlanc, Ann Billeaud, Elaine Morrow and husband, Frank, Lelia Allan and husband, Bob, and Yvonne LeBlanc; a son-in-law, Vince Mallette and wife, Hazel; her beloved grandchildren, Emily Briscoe, Ryan James, Monica Gauthier (Ryan), Alesha Perkins (John Ray), Lauren LeBlanc (Scott), Richard Billeaud (Abigail), George "Randy" Billeaud (Carrie), Jacob Billeaud (Jaylyn), Michael Billeaud (Caroline), John Paul Billeaud, Erin Billeaud, Catherine Billeaud (Payton), Arianna James (Ben), Olivia Thibodeaux (Hunter), Victoria Allan, Andrew Allan, and Mary Grace Allan; 21 great-grandchildren; sister-in-law Caroline Landry. She was preceded in death by her husband, George LeBlanc; her daughter, Renee Mallette; son-in-law, Duane Billeaud; her parents, John T. Landry and Lelia Peltier Landry; sisters, Hattie Whitson and Helen Safford; and her brothers, John T. Landry, Jr. and Walter Landry. Margie was born in Thibodaux, Louisiana in 1932. She was a loving mother, wife, grandmother, great-grandmother and a loyal friend. She was a devout Catholic, a daily communicant, member of the Altar Society and a member of the parish council of St. Mary Mother of the Church. Margie had unwavering faith in God and ensured her children were raised to honor him. She shared the light and love of Christ with all she encountered. Margie was a founding member of the first group of Theresians in Lafayette and served as National President. For many years, Margie attended Catholic retreats in Grand Coteau; her most profound retreat was the 19th Annotation (Ignatian Retreat in Daily Life). She was also a member of the SERRA Club and was in the first volunteer group of Hospice of Acadiana. Margie went on several mission trips to Mexico and four pilgrimages to Europe. Margie was passionate about helping those who were less fortunate. She was selfless with her time, opened her home to those in need, spent countless hours actively listening to others and volunteered in many ways to help the poor. Margie and her husband George were always offering their help to any organization that needed assistance. Pallbearers will be Dan Safford, Richard Billeaud, George Billeaud, Jacob Billeaud, Michael Billeaud, John Paul Billeaud, and Scott LeBlanc. In lieu of flowers, memorial contributions can be made in Marjorie "Margie" Landry LeBlanc's name to Focus Clubhouse, P.O. Box 5014, Lafayette, LA 70501 and Priests for Life, P.O. Box 236695, Cocoa, FL 32923. Her daughters would like to extend a heartfelt appreciation to her friends and family for the many years of dedicated friendship, compassion, and love shown to their mother. The family would also like to thank the staff of Heart of Hospice with special gratitude to Skyla Pilcher and Amber Morgan for their loving care of her during her last days. Margie and her daughters are forever grateful to her caregivers for the excellent medical and spiritual care shared with her during this illness; these providers included Victoria Papillion, Dianne Alexander, Katina Hebert, Kathy Cormier and Emily Briscoe. God sent his angels with each of these women who cared for her and shared her faith in her time of need. View the obituary and guestbook online at www.mourning.com Martin & Castille-DOWNTOWN-330 St. Landry St., Lafayette, LA 70506, 337-234-2311

Funeral services will be held on Monday, February 28, 2022 at a 12:30 PM Mass of Christian Burial in St. Mary Mother of the Church in Lafayette, for Marjorie "Margie" Landry LeBlanc, 89, who peacefully passed away on Thursday, February 24, 2022... View Obituary & Service Information

The family of Marjorie "Margie" Landry LeBlanc created this Life Tributes page to make it easy to share your memories.

Send flowers to the LeBlanc family.