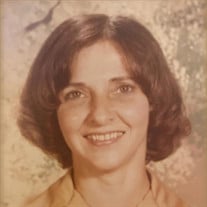 Not sure what to send?

A Mass of Christian Burial will be held on Saturday, May 21, 2022 at 1:00 pm at Cathedral of St. John the Evangelist in Lafayette for Marlyn "Boo" Domingue Moore, 88, who died on Saturday, May 7, 2022. Interment will be in St. John Cemetery. Reverend Kyle White, Pastor of St. Leo the Great Church in Lafayette, will conduct the funeral services. Survivors include her daughters, Marlyn "Marni" Moore Miller and Lauri Liljeberg, son-in-law, Mattias Liljeberg; five grandchildren, Paul Logan Miller and his wife, Christina Denley Miller, Caitlyn Marie Moore, Ethan Andrew Miller, Helena Emilie Liljeberg, and Carina Alison Liljeberg; and one great grandchild, Nathan Micah Miller. Marlyn is preceded in death by her son, Robert “Bobby” Wallace Moore, Jr.; and her parents, Earl and Lily Landry Domingue. She was both a beauty and a scholar, graduating with honors and many accolades including, the court of Diotima second lady in waiting, homecoming queen and cheerleader, Southwestern Mardi Gras Ball maid of the court, Lafayette Lovely, Phi Gamma Mu National Honor Society honor, ballerina in the Camelia Pageant and Who's Who Among Students. She was captain of the debate team at Mt. Carmel High School, winning first place at rally, winning a scholarship to Southwestern Louisiana Institute, and won many awards in debate in both high school and college. She was an accomplished dancer and ballet teacher. She was active in the American Kennel Club, judging shows and breeding party-colored cocker spaniels that were American and Canadian champions, as well as Dog Agility shows. She remained active in the dog community throughout her last years. For over 30 years, Boo worked in the Special Education Department of East Baton Rouge Parish school system. She retired as Supervisor of Related Services in 1998. She was a very hard worker, tenacious, strongly independent, cheerful, contentious, and organized. She has certainly left an indelible imprint upon this world, touching the lives of everyone she helped throughout her life, from wayward teens in her home to deaf mutes in her schools. During her tenure with the school system, she wrote a 94-142 Federal grant which began the Hearing-Impaired Program which has seen hundreds of Deaf and hard of hearing students participate in classes with hearing students. She then continued to seek new methods of working with these children. She wrote another grant to fund EBR's Hearing Impaired teachers the opportunity to train under P Guberina, a Croatian born linguist, in the Verbo-tonal method of aural rehabilitation. For those in the aural rehabilitation field, this method was used by Daniel Ling to establish the training now used for clients' therapy following a cochlear implant. She was instrumental in setting up the Vietnamese refugee resettlement program; the SMILE program along with other opportunities for those with communication disorders and hearing impairments. She documented everything and every penny spent, every call received, and every assignment given to her. If anyone needed anything, they asked Boo. She would have it recorded somewhere in her files. She worked tirelessly and always expected those around her to do the same. Following the death of her mother and while still working full-time in her career, Boo took an active role in managing Don's Seafood, a family-owned restaurant which she continued post-retirement from the school system through the 2016 flood. Pallbearers will be Ethan Andrew Miller, Paul Logan Miller, Mattias Lilijeberg, Jimbo Pastor, John Pastor, and Phillip Cagnina. The family requests that visitation be observed in Martin & Castille's DOWNTOWN location on Friday from 5:00 pm to 7:00 pm and will continue Saturday from 10:00 am to 12:30 pm. In lieu of flowers, please donate in Boo's memory to the Capital Area Animal Welfare Society, 6357 Quinn Dr, Baton Rouge, LA 70817. View the obituary and guestbook online at www.mourning.com Martin & Castille-DOWNTOWN-330 St. Landry St., Lafayette, LA 70506, 337-234-2311

A Mass of Christian Burial will be held on Saturday, May 21, 2022 at 1:00 pm at Cathedral of St. John the Evangelist in Lafayette for Marlyn "Boo" Domingue Moore, 88, who died on Saturday, May 7, 2022. Interment will be in St. John Cemetery.... View Obituary & Service Information

The family of Marlyn "Boo" Domingue Moore created this Life Tributes page to make it easy to share your memories.

A Mass of Christian Burial will be held on Saturday, May 21,...

Send flowers to the Moore family.