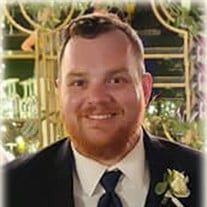 In lieu of flowers, please donate to Journey House, a local sober living house founded by Matt with a goal to provide newly sober addicts/alcoholics with a clean living environment, www.journeyhousela.org/donate On Monday, July 19th, 2021, Matthew McLain was called into the Lord’s eternal care at the age of 31. Matt was born on June 15th, 1990, to Bryan and Kim McLain and was quickly joined by his two brothers, Brandon and Christian. From an early age, Matt proved to be exceptionally gifted and excelled in countless school subjects and many sports. This affinity for sports would turn into a powerful love that would span his lifetime, prompting many weekend visits to Death Valley for LSU football games and many seasons of successful fantasy football. He was an overall fierce competitor, whether it was football, tennis, basketball, ping pong, or even a friendly board game. Among the titles of sports fanatic and fierce competitor, Matt was also an avid reader, music lover, movie buff, and a self-proclaimed food critic. More importantly though, Matt was a family man and a man of God. He was a son, brother, devoted husband, uncle, father, godfather, and friend. And even though there were years of hardship and pain, Matt was always unapologetically himself. He was true to himself in the worst of times and in the best of times, a characteristic that demanded respect by all who knew him. Matt was considerate and patient, witty and funny, sympathetic and generous. Matt’s best quality, however, was his natural heart of gold. Anyone from his childhood could confirm this, but even the many people Matt encountered throughout the darker years of his life will say the same. Matt’s story isn’t just a tale of struggle and adversity. Following years of pain, Matt’s life was suddenly transformed in October 2015 when he met Randi Skilton. Meeting the love of his life with a clear mind propelled Matt into the man that God intended him to be. And his upward journey didn’t stop there. On January 11th, 2017, Matt and Randi welcomed Charli Rose into the world, Matt’s greatest accomplishment and biggest joy. Matt battled addiction valiantly and prevailed long enough for his family to see him at his best. With one foot out of the door, Matt selflessly decided to step back into the world of addiction by helping others fight this deadly disease. If you truly knew Matt, you knew that his calling was to help others…and that he did. And while Matt lost many friends to the battle of addiction, we believe that he saved more. Through his work, Matt was able to positively impact hundreds and send so many home safely back to their families. I think most would agree that saving so many, even though he couldn’t save himself, was a life fulfilled. “The ultimate measure of a man is not where he stands in moments of comfort and convenience, but where he stands at times of challenge and controversy. The true neighbor will risk his position, his prestige, and even his life for the welfare of others.” Matt’s story is hard to tell but if telling it means we save the life of another going through similar challenges, then we would tell it a million times….because that’s what Matt would want. He is survived by his wife, Randi McLain; his daughter, Charli Rose McLain; his mother, Kim McLain; his father, Bryan McLain and his wife Sylvia; his brothers, Brandon McLain and Christian McLain; his sister, Jennifer Armond; his step brothers, Cody Musgrove and Jim Van Breemen; his maternal grandfather, Richard Fitch; and his paternal grandmother, Del Rita McLain. He was preceded in death by his maternal grandmother, Shirley Fitch; and his paternal grandfather, Earl McLain. The family will receive guests at Martin & Castille’s SOUTHSIDE location on Sunday, July 25, 2021 from 4:00 PM to 8:00 PM. On Monday, July 26, 2021 the family will receive guests at Our Savior’s Church, Lafayette Campus, 1201 E. Broussard Road, Lafayette, from 10:00 AM until the service begins at 12 Noon in the sanctuary. Pastor Jacob Aranza will lead the service. For if we live, we live to the Lord, and if we die, we die to the Lord. So then, whether we live or whether we die, we are the Lord’s. -Romans 14:8 Pallbearers will be Christian McLain, Brandon McLain, Jim Van Breemen, Cody Musgrove, Reese Shannon, Nick LeBrun, Emile Joseph, and Heath Vallot. View the obituary and guestbook online at www.mourning.com Martin & Castille-SOUTHSIDE-600 E. Farrel Rd., Lafayette, LA 70508, 337-984-2811

The family of Matthew Jordan McLain created this Life Tributes page to make it easy to share your memories.

In lieu of flowers, please donate to Journey House, a local sober...

Send flowers to the McLain family.