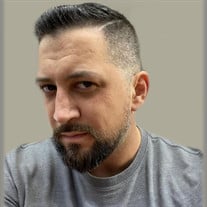 A Celebration of Life will be held on Thursday, February 10, 2022 at 11:00 AM (CST). Matthew A. Turpin, Sr., 31, passed away on Thursday, February 3, 2022 in Lafayette. Services will be held in Martin & Castille's La Fleur de Lis Chapel, 600 E. Farrel Road, Lafayette, LA 70508. The family requests that visitation be observed from 9:00 AM (CST) until time of services. Pastor Joseph Darby will conduct the funeral services. Survivors include his wife of 12 years, Tamika Spencer Turpin; his children, Matthew A. Turpin, Jr., Madeline Elizabeth Turpin, and Toni Madison Gardner; his mother, Ladonna Dunson Turpin; his siblings, Katherine Turpin Sharp, David Turpin and wife, Callie, Christopher Turpin and wife, Lacy, Ethan Turpin and Anthony Turpin and wife, Minyone; his mothers-in-law, Alvena Brooks Spencer and Hilda Sims; father-in-law Homer Sims, III; many nieces and nephews whom he loved dearly, along with extended family members. He was preceded in death by his father, Larry Don Turpin, and father-in-law, Joseph Spencer. Matthew was a well-loved person with a badass personality. He proudly served his country in the United States Army. Matt was a fearless leader whom everybody loved and depended on. He was a great husband, father, brother and a loyal friend. He was calm, loving, and fun. He loved guns and knives and was never seen without his weapons on him. Matt earned his Bachelors Degree in human resources from American Military University and was currently striving for his law degree and was close to graduating Pre-Law. Honorary Pallbearers will be David Turpin, Tom Smith, Daniel Bolin, Derrick Johnson, Ja'Colby Jennings, Ke'Auante Spencer, Kevin Sang, Kyle Van Zandt, Willis Spencer and Charles Thomas. "Three words, eight letters." View the obituary and guestbook online at www.mourning.com Martin & Castille-SOUTHSIDE, 600 E. Farrel Road Lafayette, LA. 70508 337-984-2811

The family of Matthew A. Turpin, Sr. created this Life Tributes page to make it easy to share your memories.

A Celebration of Life will be held on Thursday, February 10,...