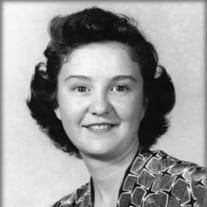 Lafayette, LA- Mattie Louise Coffman, 93, passed away at home in Lafayette on Friday, March 26, 2021. A Graveside Ceremony will be held on Wednesday, March 31, 2021, 2:00 pm at Fountain Memorial Mausoleum in Lafayette. Mattie was born Aug. 30, 1927, to Ward B. Johnson and Myrtle P. Johnson in Pitkin, LA and grew up in Oberlin, LA. She graduated with a BS Degree in Education from Louisiana College. Mattie married her childhood sweetheart, Vernon Dale Coffman, Sr. and the two settled in Lafayette where they spent their life together raising their family for 72 years until Vernon’s death in 2016. Mattie’s career began as a Home Economics and Chemistry teacher in Webster Parish and later moved to Rayne High School after marriage. She was beloved by her students during her 17 teaching years, and was fond of the many personal letters and recognitions she often received from them. Mattie served her community through leadership roles as an advocate for youth and young mothers. Her service began with Faith House and later as Pres. of Acadiana Youth, Inc. where she served for over ten years establishing support for the Children’s Shelter and the Acadiana Shelter for Girls, and subsequently was named the first honorary board member of Acadiana Youth, Inc. These works provided support resulting in the completion of the Women’s and Children’s Shelter, known today as Faith House, a Domestic Violence Crisis Center, which provided a haven for Acadiana’s abused and neglected women and children at the time of inception. Faith House continues to this day to provide so many more services to the women and children of our Acadiana community. Mattie fundraised yearly for the March of Dimes as neighborhood coordinator. She was an active member in and served as V.P. of Lafayette’s En Avant Club, a Girl Scout Troop Leader and a Sunday School Teacher. As part of her involvement with Emanuel Baptist Church and later First Baptist Church, Mattie placed her faith in God. She and Vernon were avid celebrants of the Mardi Gras season and members of The Royal Order of Troubadours Krewe and The GSWLA Mardi Gras Assoc.’s Krewe of Gabriel. She was well known as a hostess, a seamstress, and an excellent cook who shared her recipes with all and was featured locally for her Chicken & Dumplings, Cornbread Dressing and Lady Baltimore Cake dishes and recipes. Mattie was a loving mother, grandmother, great grandmother, daughter and sister who always put her family in the forefront of her life. She is survived by her son, Dr. Vernon Dale Coffman, Jr. and her daughter-in-law, Elena LaFarque Coffman of Baton Rouge; her daughter, Carla Patricia Gossen and her son-in-law Gregory Martin Gossen of Lafayette; her daughter, Tanya Lou Falterman and son-in-law Dr. Kenneth Falterman of Lafayette; her son, Dr. Mitchell Ward Coffman of Fort Collins CO; her grandchildren, Kristin Leigh Robertson of Dallas TX, Cullen Coffman Barone and spouse Grant Michael Barone of Baton Rouge, Kendall Dale Coffman of Baton Rouge, Grant Dale Coffman of Baton Rouge, Matthew Coffman Gossen and spouse, Necia Marie Weimer of Highlands Ranch CO; Christopher Patrick Gossen of Lafayette, Grier Dale Gossen of Lafayette, Olivia Louise Falterman of Lafayette and her great grandchild, Jack Michael Barone of Baton Rouge. She is preceded in death by her forementioned parents and husband as well as her sister, Ruth Duggar of Beaumont TX, brothers, Rudolf Johnson of Folsom and Jack Johnson of Oberlin, her grandchild, Mary Elizabeth Falterman and great grandchild, Michael Vernon Barone. The family would like to offer their warmest thanks to Mattie's family of caregivers, whom she loved dearly. Online obituary and digital guest book may be viewed at https://www.mourning.com/obituaries/ Martin & Castille-SOUTHSIDE-600 E. Farrel Rd., Lafayette, LA 70508, 337-984-2811

The family of Mattie Louise Coffman created this Life Tributes page to make it easy to share your memories.

Send flowers to the Coffman family.