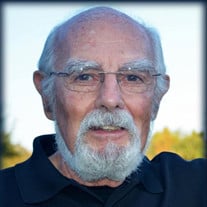 Memorial services will be held for Maurice Laporte on Monday, January 24, 2022 at 3:00 PM at Martin and Castille's La Fleur de Lis Chapel, 600 E. Farrel Rd., Lafayette, LA, 70508. Maurice was 83 when he passed away on Friday, January 21, 2022 at The Carpenter House of St. Joseph Hospice in Lafayette. The family requests that visitation be observed in Martin & Castille's SOUTHSIDE location, 600 E. Farrel Rd., Lafayette, LA, 70508 on Monday, January 24, 2022 from 1:00 PM until time of service at 3:00 PM. Reverend Francis Fontenot will conduct the funeral service. Mauricio (Maurice Charles Manuel Laporte) was born in Limonges, France in 1938, to a French father and Guatemalan mother. At the age of 16 he moved to Guatemala with his mother, brother and sister not knowing any Spanish. In 1957 he enrolled at LSU Baton Rouge College of Architecture where he was a full-time student and worked in the Language Department and Faculty Club. He was a student at the time when Billy Cannon and the LSU Tigers won their first SEC Championship. He graduated in 1962 and worked briefly in Baltimore before moving to Spain to take a series of advanced architecture courses. Maurice returned to Guatemala where he met Patricia Jacob. They got married in 1964 and had 2 children, Christian and Melanie. He worked for the FHA and had his own independent architecture firm for 15 years. Maurice moved his family to New Orleans in 1982 where he worked with his good friend and college roommate, architect Ernie Dorfi. He worked on projects such as the remodel of the Louis Armstrong International Airport, the library at Xavier University, as well as in Delgado College. He was the project architect in charge of the campus reconstruction of UNO after Katrina. Maurice was an expert in building codes and had a keen eye for specifications and building requirements. In 2007 Maurice moved to Lafayette where his daughter, son-in-law, and grandchildren lived. While in Lafayette he worked for Angelle Architects. He was the project architect in the remodeling of the St. Martinville Court House and Annex originally built in 1853. This very complex modernizing project was his pride and joy. He developed an admiration for the work ethic of all local tradesmen - Cajun, Creole, and Spanish-speaking crews. It was during this project that he developed a love for early Louisiana history. Maurice loved the United States. He was very proud to be an American but was a true Frenchman at heart; he loved fine food and wine, as well as the written word. He was an avid reader of historical novels and was fluent in 3 languages. He was just about the most interesting man in the world. He was very proud of his children and grandchildren and enjoyed their company very much. His legacy of honesty, love, and responsibility will be with us forever. Maurice is survived by his devoted wife of 57 years, Patricia, his son Christian and his wife Rossana Muller Laporte, his daughter Melanie Laporte Granados and her husband Alberto Eloy Granados, and his grandchildren Sara, Ian, Dominique, and Andre. View the obituary and guestbook online at www.mourning.com Martin & Castille-SOUTHSIDE-600 E. Farrel Rd., Lafayette, LA 70508, 337-984-2811

The family of Maurice Laporte created this Life Tributes page to make it easy to share your memories.

Memorial services will be held for Maurice Laporte on Monday,...

Send flowers to the Laporte family.