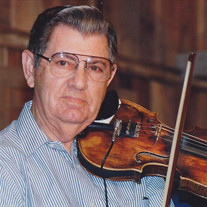 Funeral services will be held on Monday, January 16, 2017 at an 11:00 AM Mass of Christian Burial at Holy Cross Catholic Church in Lafayette for Merlin Fontenot, age 93, who died on Tuesday, January 10, 2017 at Lafayette General Medical Center in Lafayette. Interment will be in Mt. Calvary Cemetery in Eunice. Reverend Howard Blessing, Pastor of Holy Cross Catholic Church will be the Celebrant of the Funeral Mass and will conduct the funeral services. Survivors include his wife of 76 years, Lillian Thibodeaux Fontenot; a daughter, Annette Marie Artigue and a son, Walter Robbie James Fontenot and his wife Sharon; three grandchildren, Ann Catherine Artigue, Paul Joseph Fontenot and Matthew James Fontenot; his siblings, Nettie Duplechain, Vivi Vidrine, Ginger Fontenot, Jenora Cort and John Fontenot and his wife Jane. He was preceded in death by his parents, Enos Fontenot and the former Gertrude McGee and two siblings Lois Miller and Verna Mae Courville. Mr. Fontenot was born in Eunice, Louisiana on September 26, 1923 and was a resident of Lafayette since 1970. He was a veteran of military service and proudly served his country as a member of the United States Army during World War II in the Pacific. Mr. Fontenot was a well known fiddle player. After WWII, he toured the country as a professional musician and played at the Grand Ole Opry. After Mr. Fontenot moved back to Lafayette, he became involved in many charities and benefits, especially for those who were either injured or died in the line of duty. Merlin was heavily involved in the preservation of the Acadian culture. Most recently he served as a cultural ambassador at Vermilionville, greeting and entertaining people from around the world. He will be missed by his family, friends and all of his music fans. The family requests that visitation be observed in Martin & Castille's SOUTHSIDE location on Sunday from 1:00 PM to 5:00 PM and on Monday from 8:00 AM until time of service. View the obituary and guestbook online at www.mourning.com Martin & Castille-SOUTHSIDE-600 E. Farrel Rd., Lafayette, LA 70508, 337-984-2811

Funeral services will be held on Monday, January 16, 2017 at an 11:00 AM Mass of Christian Burial at Holy Cross Catholic Church in Lafayette for Merlin Fontenot, age 93, who died on Tuesday, January 10, 2017 at Lafayette General Medical Center... View Obituary & Service Information

The family of Merlin Fontenot created this Life Tributes page to make it easy to share your memories.

Send flowers to the Fontenot family.