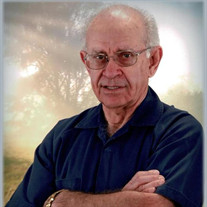 Funeral services will be held on Tuesday, January 18, 2022, at a 2:00 pm Liturgy of the Word Service in Martin & Castille’s DOWNTOWN location for Merrick Joseph Bourgeois, 84, who passed away on Monday, January 17, 2022, at Lady of the Oaks Nursing Home in Lafayette. The family requests that visitation be observed in Martin & Castille's DOWNTOWN location on Tuesday, January 18, 2022, from 11:00 am until time of services. A Rosary will be prayed on Tuesday afternoon at 1:00 pm in Martin & Castille Funeral Home. Deacon David Menard of St. Charles Borromeo Catholic Church in Grand Coteau, will conduct the funeral services. Survivors include three daughters, Brenda Bourgeois, Patty Trahan and her husband, David, and Lisa Royer and her husband, Danny all of Carencro; five grandchildren, Darrell Broussard, Jr. and his wife, Kelly, Jeremy Bourgeois and his partner, Amanda Simon, Donovan Trahan and his wife, Casie, Duston Bourgeois and his wife, Brooke, and Ryan Bourgeois and his partner, Megan Wartell; thirteen great grandchildren, Kassidie, Keely, Kolt, Kinlee, Baylee, Brakyer, Jackie, Blaise, Madison, Luke, Paisley, Harlie, and Noah; and one brother, Easton "T-Boy" Bourgeois and his wife, Gail, of Carencro. He was preceded in death by his wife, Maudry R. Bourgeois; his parents, Sidney Joseph Bourgeois and the former Rita Mae Castille; one brother, Norris Joseph Bourgeois and his wife, Leah; and the mother of his daughters, Autherine B. Bourgeois. Merrick was a native of Lawtell and a longtime resident of Lafayette. He was the owner and operator of Able Glass Co. in Lafayette. Mr. Bourgeois also farmed and raised cattle for many years. Honorary pallbearers will be his grandsons: Darrell Broussard, Jr., Jeremy Bourgeois, Donovan Trahan, Duston Bourgeois and Ryan Bourgeois and his nephew, Shane Bourgeois. A heartfelt appreciation is extended by the Bourgeois family to the doctors, nurses and staff of both Lady of the Oaks Nursing Home and Hospice Compassus for the excellent care shown to Merrick over the years. View the obituary and guestbook online at www.mourning.com Martin & Castille-DOWNTOWN-330 St. Landry St., Lafayette, LA 70506, 337-234-2311

Funeral services will be held on Tuesday, January 18, 2022, at a 2:00 pm Liturgy of the Word Service in Martin & Castille&#8217;s DOWNTOWN location for Merrick Joseph Bourgeois, 84, who passed away on Monday, January 17, 2022, at Lady of the... View Obituary & Service Information

The family of Merrick Bourgeois created this Life Tributes page to make it easy to share your memories.