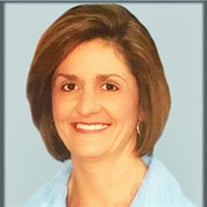 Mr. Kenneth Lloyd Hix and Mrs. Missy Lynn Toups Hix of Lafayette, Louisiana died on September 20, 2020, both at the age of 59. A Memorial Service celebrating their lives will be held on Friday, September 25, 2020 at St. Jules Catholic Church at 10:00 AM. The family will receive friends on Thursday, September 24, 2020 from 4:00 PM to 8:00PM at St. Pius X Catholic Church. Visitation will continue Friday, September 25, 2020 at St. Jules Catholic Church beginning at 9:00 AM until the time of service. Reverend Dan Edwards, Pastor of St. Jules Catholic Church in Lafayette, will conduct the funeral services. Survivors include their two sons, Austin J. Hix of Lafayette and Connor J. Hix of Lafayette; Missy Toups Hix parent’s, Anson and Ruth Toups, and her siblings, Kitty Toups, Rusty Toups, Kelly and (Kris) Toups, Toby and (Tessie) Toups, and numerous nieces and nephews; Kenny Hix’s mother, Jo Condray Hix and sister, Karen Hix-Cherico. Kenny was preceded in death by his father John Lloyd Hix. Kenneth Hix was born January 14, 1961 in Lafayette, LA. He spent his childhood growing up in Natchitoches, LA, as well as traveling around the world with his educator-parents and beloved sister. Kenny attended college at Northwestern State University, where in addition to following in his footsteps as an overachiever in all aspects of his life, he would meet his best friend and wife Missy Lynn Toups. Kenny then attended law school at Louisiana State University, before returning to Lafayette, a city he loved so much, to practice law and start a life. In addition to his practice of law, Kenny found great success in several fields of business, always applying his trademarked brand of diligence, rigor, kindness, and generosity to any endeavor he put his mind to. Never braggadocios, Kenny chose to measure the great success he found in life not in achievements or acclaim, but rather in the countless lives he touched and many friends he made along the way. None of this success would have been possible without the tireless efforts of Kenny’s personal life-manager and wife, Missy Hix. Missy Lynn Toups was born on January 8, 1961 in Galliano, LA to a large family of relentlessly headstrong individuals. Determined to make a life for herself, Missy left the bayou and attended college in Natchitoches, LA at Northwestern State University where she would meet her future husband and lifelong project, Kenny Hix. Always supportive, Missy worked hard to put Kenny through law school and provide for their family while Kenny was establishing himself as the successful businessman he would become. Missy made sure that every aspect of her family’s life was meticulously maintained, a task she found delight in. Those who had the privilege of knowing Missy will remember her for her warmth, her generosity, and her uncanny excellence in hosting friends in her home or anywhere people would gather, whether or not they wanted her to do so. Missy’s one desire in life seemed to be making sure everyone around her was always happy and well-fed, a task she always seemed to accomplish. Both Missy and Kenny loved the Acadiana community. Though neither one ever attended class at the University of Louisiana at Lafayette, both were honorary alums. Missy and Kenny were avid supporters of Ragin Cajun athletics, and could often be found at UL games. Devout Catholics, the couple found numerous ways to give themselves to the greater Acadiana Community. Through their activities with Lourdes Hospital, the VA Hospital, Angel Air, United Way, and the Miles Perret Center; Missy and Kenny’s first thought was always of helping others. A rosary will be prayed in their honor on Thursday, September 24, 2020 as St. Pius X Church at 6:30 PM. In lieu of flowers, the family requests that donations be made in the names of Kenny and Missy Hix to the Diocese of Lafayette, 1408 Carmel Drive Lafayette, LA. 70501. View the obituary and guestbook online at www.mourning.com Martin & Castille-SOUTHSIDE-600 E. Farrel Rd., Lafayette, LA 70508, 337-984-2811

Mr. Kenneth Lloyd Hix and Mrs. Missy Lynn Toups Hix of Lafayette, Louisiana died on September 20, 2020, both at the age of 59. A Memorial Service celebrating their lives will be held on Friday, September 25, 2020 at St. Jules Catholic Church... View Obituary & Service Information

The family of Missy Lynn Toups Hix created this Life Tributes page to make it easy to share your memories.

Send flowers to the Hix family.