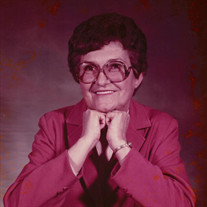 Catholic Funeral Services will be held for Mona Lane Clark on Wednesday, April 20, 2022 at 3:00 PM at Martin and Castille Funeral Home of Scott. Mona was 87 when she passed away at her residence in Judice on Thursday, April 14, 2022. The family requests that visitation be observed in Martin & Castille's SCOTT location on Wednesday, April 20, 2022 from 9:00 AM until time of services. A Rosary will be prayed on Wednesday, April 20, 2022 at 11:00 AM in Martin & Castille Funeral Home. Interment will be in Sts. Peter & Paul Cemetery in Scott. Reverend Steven LeBlanc, Pastor of St. Basil Church in Judice, will conduct the funeral services. Survivors include her daughters, Becky Clark and Sandy Clark Aucoin and her husband, Paul; her sons, Michael Clark, Sr. and his wife, Janel and David Clark and his wife, Tammy; her sisters, Dianna Guidry, Mona Hebert and Sherry Weekly; her brother, Pierre "CJ" Leger; her grandchildren, Michelle Elmer, Casie Leger, Michael Clark, Jr., Brandon Leger, Mitchell Clark, Scotty Aucoin, Melissa Pierce, Elizabeth Lavergne, Dylan Touchet, Kaitlyn Aucoin, Emily Kincel, Madelyn Clark; seventeen great-great grandchildren; and numerous nieces and nephews. Mona was preceded in death by her beloved husband, Earlis Clark; her infant son Ronald Clark, her parents, Telesphor Leger, Oleta Romero Leger; her brother Frank Leger; her sister Sable Menard. Mona was a previously a member of St. Basile Catholic Church in Judice and also a member of the Rayne African Violet Society. Because of her love for gardening, Mona tended to her plants daily using hand tools only. Her delicate care for her African Violets won her many awards. Some of her other hobbies included crocheting and cooking. Although Mona had many interests in life, her passion was spending time with her family. She will be deeply missed by all who knew her. Upholding the honor of pallbearers will be Michael Clark, Jr., Mitchell Clark, Scott Aucoin, Dylan Touchet, Darryl Leger, Ricky Menard and Landon Clark. Honorary Pallbearers will be Payton Leger and Jaiden Clark. A heartfelt appreciation is extended by the Clark family to Candice and Jamie with Hospice of Acadiana. Also a very special thanks to her caregivers, Tanya Romero, Terry Comeaux, Denise Smith, Cindy Galley and Tanya Sundberg for making us feel like part of their family. We would also like to acknowledge the tender and compassionate care given by our sister Becky Clark, she was truly mom's backbone. View the obituary and guestbook online at www.mourning.com Martin & Castille-SCOTT-802 Alfred St., Scott, LA 70583, 337-234-2320

Catholic Funeral Services will be held for Mona Lane Clark on Wednesday, April 20, 2022 at 3:00 PM at Martin and Castille Funeral Home of Scott. Mona was 87 when she passed away at her residence in Judice on Thursday, April 14, 2022. The family... View Obituary & Service Information

The family of Mona Lane Clark created this Life Tributes page to make it easy to share your memories.

Catholic Funeral Services will be held for Mona Lane Clark on...

Send flowers to the Clark family.