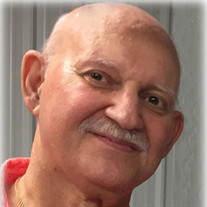 A Mass of Christian Burial will be celebrated at 2:00 p.m. on Tuesday, April 27, 2021, at St. Edmond Catholic Church in Lafayette for Francis Anthony LeBlanc, 69, who passed away at 9:10 a.m. Friday, April 23, 2021. The Rev. Gil Dutel will be the Celebrant of the funeral Mass. Interment will follow at Holy Mary Mother of God Cemetery in Lafayette. The family requests that visiting hours be observed at Martin & Castille Funeral Home DOWNTOWN on Monday from 4:00 p.m. until 8:00 p.m. and on Tuesday from 10:00 a.m. until time of service. A Rosary will be prayed at 7:00 p.m. on Monday. Francis was a native of Scott, a 1969 graduate of Scott High School, and a resident of Lafayette. He stood tall and powerful, a strong, silent type who embodied the greatest qualities of our better angels. Francis was always known for his physical strength - and that vise-like grip - but his formidable brawn belied a most kind and gentle nature. He was a faithful and loving husband, a steadfast moral compass for his son, and a devoted Catholic. His work ethic and unwavering sense of fairness was his stock and trade. He always returned requests for help with those same strong, dependable arms. Francis was an outdoorsman and conservationist at heart; his most treasured distractions came while enjoying the bounty of Sportman’s Paradise, steering that old boat to a quiet spot in Henderson or Lake Fausse Pointe State Park or working to restore his 1968 emerald Chevrolet truck. An animal lover, he was devoted to his beloved cat, Milo. Above all, Francis loved and cherished his family, be they immediate or extended. They could make ’em like Francis, but they never make ’em any better. Francis is survived by his wife of 51 years, Marie Durio LeBlanc, the love of his life and inseparable companion; his son, Anthony Joseph LeBlanc, and his wife, Amy Pierron LeBlanc; his sister-in-law, Melanie Ann Durio; and his brother-in-law, Larry Durio, and his wife, Sue Durio; and Larry's daughter, Charlie Durio Boudreaux and her husband, Daryl. Special loving mention is extended to Mrs. Boudreaux’s son and daughters, Logan Lopez and Lauren and Laina Boudreaux, all of whom Francis loved dearly. Additional survivors include numerous cousins, nieces, nephews, and extended family relations. He was preceded in death by his parents, Marie Begnaud LeBlanc and Gabriel John LeBlanc; his twin brother, Franklin John LeBlanc, and two infant sisters; his mother-in-law, Emma Lou Stutes; his aunts, Constance LeBlanc and Lawrence Raggio and her husband, Voohries Raggio. The family wishes to express thanks to the doctors, nurses, and staff at Our Lady of Lourdes Regional Medical Center, including Drs. Dowden, Chen, Higginbotham, Liu, Riggs, and Williams, in addition to the staff of Houston Methodist Hospital, Lafayette Rehabilitation Hospital, and the staff of Nora's Home in Houston, for the care and compassion they extended to Francis throughout his lengthy illness. The family would also like to extend special heartfelt notice and appreciation to Richard and Paulette Yandle and family; Melanie Durio; Paul Begnaud and his late wife, Juanita; Gertrude and Lynn Chaney and family; Conrad Bercier and his wife, Aimee; Larry Durio and his wife, Sue; Theresa Vincent and her husband, Junior; Susan Boyle and her husband, Ricky; Sylvia Stroud and her husband, Gerald; Andy Falcon and his wife, Betty; Maxine Raggio Hebert; Connie Conques; Greg Stutes and his wife, Patrice; Debbie Huval and Randy Credeur; and Johnny Knickerbocker and his wife, Cindy, and their family for their love and devotion to Francis during his time of most urgent need. Their fidelity and selflessness will never be forgotten. Pallbearers will be Anthony LeBlanc, Larry Durio, Gerald Stroud, Glen Raggio, Andy Falcon, Mike Landry, Don Begnaud, and Greg Stutes. Honorary pallbearers will be Paul Begnaud, Daryl Boudreaux, Logan Lopez, Conrad Bercier, Johnny Knickerbocker, Ricky Boyle, Lee Anslem, Shaun Anslem, and Gabe Anslem. Giftbearers will be Laina and Lauren Boudreaux and Logan Lopez. Scriptures will be read by Richard Yandle and Anthony LeBlanc. The Rosary will be prayed by Mary Stutes. The family would appreciate any memorials or remembrances in Francis’s name to be made to local animal rescue groups or advocacies. View the obituary and sign the guestbook online at www.mourning.com. Arrangements have been entrusted to Martin & Castille Funeral Home, 330 St. Landry St., Lafayette, LA 70506, (337) 234-2311.

The family of Mr. Francis A. LeBlanc created this Life Tributes page to make it easy to share your memories.

Send flowers to the LeBlanc family.