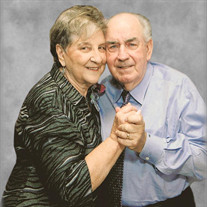 Funeral Services will be held on Sunday, February 28, 2021 at 2:00 PM in La Chapelle de Martin & Castille in Lafayette for Nolan and Hilda Stelly Hebert. Hilda, age 82, passed away on Friday, January 22, 2021 and was joined by her husband Nolan, age 83, who passed away one week later on Friday, January 29, 2021, at Our Lady of Lourdes Regional Medical Center. They both passed away peacefully in their sleep after a brief illness, as they had always desired to. Entombment will be at Fountain Memorial Gardens Cemetery Mausoleum in Lafayette. Reverend Howard Blessing will conduct the services. For family members and friends who are unable to attend the funeral on Sunday, February 28, 2021 at 2:00 PM, the service will be live-streamed and may be viewed by clicking the following https://client.tribucast.com/tcid/6079189 They are survived by their children (and their spouses), Denise H. Romero (Randy), Roxanne H. Roger (Michael), Karen H. Poche (Floyd), and Marcus Hebert (Tessie); their grandchildren (and their spouses), Ashley R. Bastida (Carlos), Jason Romero (Brye), Rebekah Poche Guidry (Blaise), Adam and Brantley Hebert, Cody Jagneaux, Scotty Poche (Chantel), and Meagan Gowdey (Derick); their great grandchildren, Dominic and Nolan Bastida, Preslee Romero, Kenley and Jase Poche, Peyton Blanchard, Matthew Dowdell, and Raymond Gowdey. Nolan is also survived by his sister, Hilda H. LeBlanc Viator. Hilda was preceded in death by her parents, Clayus and Eunice Perez Stelly. Nolan was preceded by his parents, Adam and Edia Dore Hebert; his brothers, Roy Hebert and his wife Lulia, and Dudley Hebert and his wife Ella, and his brothers in law, J.R. LeBlanc and Wilson Viator. They were both preceded in death by their granddaughter, Desiree Michelle Poche. Nolan and Hilda were both retired, enjoying their life while spending time with their children, grandchildren, and friends. Nolan was a graduate of Erath High School, served honorably in the Army National Guard, and worked as the shipping supervisor for L. A. Frey Meats in Lafayette in his early years. For the remainder of his career until he retired in 2007, Nolan was a contractor specializing in residential construction and built countless custom homes in Acadiana for his clients, often building more than one home for that same client over the years. Hilda was a graduate of Breaux Bridge High School. In her early years, she worked for First National in Lafayette in the Bookkeeping Dept. She put work aside after the sudden death of her mother in 1965, dedicating herself to raising her family and caring for her father. She later worked for Abdalla’s in the Oil Center for almost 20 years, retiring in 2000 as an assistant manager in the Children’s Dept. Hilda was blessed with a loyal clientele who became special friends over those years, as well as her work family who were very dear to her heart. They will both be missed by the many lives they have touched and forever loved in the hearts of their family. The family requests that visitation be observed in Martin & Castille's DOWNTOWN location on Saturday, February 27, 2021 from 4:00 PM to 8:00 PM and will continue on Sunday, February 28, 2021 from 10:00 AM until time of services. A vigil service will be held at 6:00 PM on Saturday evening and a Rosary will be prayed on Sunday at 12 Noon in the funeral home. Pallbearers for Hilda S. Hebert will be, Jason Romero, Carlos Bastida, Adam Hebert, Brantley Hebert, Blaise Guidry, and Scotty Poche. Pallbearers for Nolan Hebert will be, Rickey Perez, Cody Jagneaux, Derick Gowdey, Michael LeBlanc, Keith Hebert, and Chris Hebert. A heartfelt appreciation is extended by the Hebert family to the doctors and nurses of Our Lady of Lourdes for their compassion and loving support. Also to all of the family and friends who continuously have offered prayers, support and their genuine concern during this difficult time. May God bless you all the way you have blessed us. View the obituary and guestbook online at www.mourning.com Martin & Castille-DOWNTOWN, 330 St. Landry Street, Lafayette, LA 70506, 337-234-2311

Funeral Services will be held on Sunday, February 28, 2021 at 2:00 PM in La Chapelle de Martin & Castille in Lafayette for Nolan and Hilda Stelly Hebert. Hilda, age 82, passed away on Friday, January 22, 2021 and was joined by her husband Nolan,... View Obituary & Service Information

The family of Nolan and Hilda S. Hebert created this Life Tributes page to make it easy to share your memories.