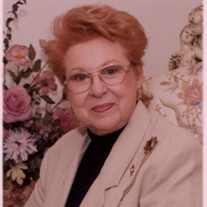 A Private Mass of Christian Burial will be held on Thursday, September 3, 2020 at 2:00 PM in Sts. Peter and Paul Catholic Church in Scott, for Nordean Billeaud, 87, who peacefully passed away on Saturday, August 29, 2020 at Courtyard Manor Retirement and Nursing Home in Lafayette. A Mass and a reception to celebrate her life will be announced for friends and family to gather in the year 2021. Interment will be in Sts. Peter and Paul Cemetery. Reverend Mark Derise will conduct the funeral services. For family members and friends who want to view the funeral Mass on Thursday, September 3, 2020, the service will be live-streamed to a Memorial Facebook Group dedicated to Nordean Billeaud. To join the group, click the link below and then "join group". The video will appear on this group at service time 2:00 PM. You may also share memories, pictures and condolences to the family in this group. Facebook link: www.facebook.com/groups/NordeanBilleaud Survivors include her three daughters, Jann Dueitt, Lana Billeaud, and Mitzi Billeaud; her sons-in-law, Al Dueitt and John McGinnis; her grandchildren, Laci Mahler, Drew Dueitt, Codi Carroll, Sean McGinnis, and Taylor McGinnis; her grand-children’s spouses, Chris Mahler, Rebecca Dueitt, Justin Carroll, and Irsal McGinnis; and her great-grandchildren, Ryler Mahler, Charlotte Dueitt, Rhett Mahler, Rogan Mahler, James Carroll, Lane Carroll, Caroline Dueitt and Chaney Carroll. She was preceded in death by her father, Clay Adam Martin and her mother, Noelie Begnaud Martin; and her brother, John Terry Martin. A Duson native and a resident of Scott for the past 65 years, Nordean was a loving soul, who devoted her life for the caring and well being of her family and children, grandchildren and great-grandchildren. Being an accomplished student in home economics, instilled in Nordean to be the loving, nurturing and caring person, with a genuine heart of compassion. She was a devout Catholic, was a parishioner of Sts. Peter & Paul Catholic Church Community, and a member of the Catholic Daughters of America. She will always be remembered by her family, and the many memories that they will share and treasure, will live on. Memorial contributions can be made in Nordean Billeaud's name to the Catholic Daughters of America, Court #2321, P. O. Box 1082, Scott, LA. 70583. A heartfelt appreciation is extended by the Billeaud family to the staff of Courtyard Manor for their compassionate care. View the obituary and guestbook online at www.mourning.com Martin & Castille-SCOTT-802 Alfred St., Scott, LA 70583, 337-234-2320

A Private Mass of Christian Burial will be held on Thursday, September 3, 2020 at 2:00 PM in Sts. Peter and Paul Catholic Church in Scott, for Nordean Billeaud, 87, who peacefully passed away on Saturday, August 29, 2020 at Courtyard Manor Retirement... View Obituary & Service Information

The family of Nordean Billeaud created this Life Tributes page to make it easy to share your memories.

A Private Mass of Christian Burial will be held on Thursday,...

Send flowers to the Billeaud family.