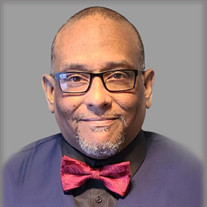 A Celebration of Life Service will be held for Mr. Oran Joseph Washington, Jr. at 2:00 PM on Sunday, March 6, 2022 at Martin and Castille's La Fleur de Lis Chapel, 600 E. Farrel Rd., Lafayette, LA 70508. Oran was 58 when he went home to be with Jesus on Thursday, March 3, 2022 at his residence while surrounded by his loving family. The family requests that visitation be observed in Martin & Castille's SOUTHSIDE location, 600 E. Farrel Rd., Lafayette, LA 70508 on Sunday, March 6, 2022 from 9:00 AM until time of services at 2:00 PM. Oran’s journey began on January 31st, 1964 in Colorado Springs, Colorado. He was the third of four children and the oldest son to Oran Sr. and Hilda Washington. Being born into a military family, he moved around with his family and they eventually settled in Lafayette. Oran attended and graduated from Lafayette High School. After high school, he attended the University of Southwest Louisiana. He then decided to complete his education at ALETA Police Academy. After graduation, he proudly served as a Lafayette Police officer for several years. He decided to change his calling and went to work at Our Lady of Lourdes Hospital for 23 years as a cardiology and telemetry medical technician. Oran had many passions outside of his career that were more significant and substantial to him. He was a martial artist and loved his kung-fu movies. He was a music enthusiast and singer and could be found serenading his family. However, his most important passion was his family: his wife Tammy, his children, cousins, nieces, nephews, and his beloved grandchildren. He had a great relationship with Christ and loved sharing his faith. Oran’s infectious personality and joy for living was evident whenever you would interact with him. Survivors include his loving wife, Tammy Washington; his four children, Oran Washington, III and his wife Kelli, Brianna Washington, Andrea McNamee and her husband Blane, Aimee Judice and her husband Kevin; his four grandchildren, Elijah Washington, Blake McNamee, Kayleigh McNamee, Amelia McNamee; his sister, Drusilla Landry; his brother, Michael Washington; and numerous nieces, nephews, cousins and friends. He was preceded in death by his parents, Oran Washington, Sr. and Hilda Bonnet Washington and his sister, Dianna Spell. Donations can be made in Oran's name to American Kidney Fund by clicking this link, https://www.kidneyfund.org A heartfelt appreciation is extended by the Washington family to Audubon Hospice, Our Lady of Lourdes Hospital and Dr. Andy Blaylock, Dr. James Dobbs, Fresenius Kidney Care West of Lafayette. Also a very special thanks to Lynelle Sonnier and Beryl Dore, his hospice nurses. View the obituary and guestbook online at www.mourning.com Martin & Castille-SOUTHSIDE-600 E. Farrel Rd., Lafayette, LA 70508, 337-984-2811

The family of Oran Joseph Washington, Jr. created this Life Tributes page to make it easy to share your memories.

A Celebration of Life Service will be held for Mr. Oran Joseph...