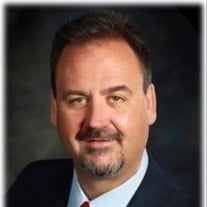 Funeral services will be held on Saturday, April 17, 2021 at a 1:30 PM Mass of Christian Burial at Our Lady of Fatima Catholic Church for Parrish Ladd Cline, age 47, who passed away peacefully with his beloved wife by his side on Thursday, April 15, 2021. Entombment will be at St. Alphonsus Mausoleum. The family request that visitation be observed at Our Lady of Fatima Church from 10:30 AM until the time of the funeral mass at 1:30 PM. Reverend Monsignor Jefferson DeBlanc, will be the Celebrant of the funeral mass and will conduct the funeral services. Gift bearers will be Adriana Cline, Rowan Cline, and Christian Cline. Lectors will be Courtney Prince Back and Katherine Prince Thibodeaux. Eulogist will be Lauren Michelle Prince. Survivors include his wife, Courtney Keller Cline, one son, Rowan Keller Cline, and one daughter, Adriana Michel Cline, his father, Robert Thomas Cline, his sisters, Paige Cline Faust and her husband Bill, Christian Cline and her husband, Yousef, his mother and father-in-law, Gloria and Doug Keller, his aunts, Debbie LeBlanc Champagne and husband Terry, and Joyce LeBlanc Prince and husband Bobby and numerous beloved God Children and cousins. He was preceded in death by his beloved mother, Sherran LeBlanc Cline, his brothers, Shane Scott and Todd Thomas Cline, his maternal grandparents, Alice Joyce and Gaston LeBlanc, his paternal grandmother, Martha Lee Carmichael, and his godfather, Shelton Jude LeBlanc. Parrish was born in Lafayette, and resided in Roberts Cove, Louisiana for most of his life. He is a graduate of Notre Dame High School where he was a varsity football player, was an avid boxer, and his favorite of all sports was hunting. In 1991 he moved to Lafayette and entered USL, now UL-Lafayette, and joined Sigma Nu Fraternity where he made new lifelong friends. He married the former Courtney Michel Keller in February of 2003 and for 18 years they loved, laughed and lived a wonderful life. Parrish was quite literally one of a kind. The epitome of a gentle giant, Parrish’s large stature behind his gentle sensitive nature and the kind heart that lie within. He will forever be remembered for his huge heart and capacity to love those he held dear. Ever the socialite, Parrish’s ideal weekend included hosting a large group of friends, cooking up some incredible dishes, and enjoying wine and good company. He truly was the best and our world will never be the same without him in it. We love you forever and always, “Big P”. Your presence will never be forgotten. Pallbearers will be Brett Champagne, Kyle Champagne, Phil Domingue, Kevin Gayle, Joseph Giglio III, Mackey Francis, Jamey Monceaux, Jason E. Wilson, and Edward “Bumper” Wilkerson. Honorary pallbearers are the late Ryan Robison, and members of the Little Chapel Camp hunting club. In lieu of flowers memorial contributions can be made to Our Lady of Fatima School, 2315 Johnston St., Lafayette, LA 70503, St. Thomas More Envision More Chapel Campaign, https://www.stmcougars.net/support/title, 450 E. Farrel Road Lafayette, LA 70508 and Ducks Unlimited, 125 Southpark Rd. Lafayette, La. 70508, Parrish Cline Memorial. A heartfelt appreciation is extended to the staff at Our Lady of Lourdes Hospital, especially to Dr. Patrick Laperouse and Dr. Wayne Cestia. View the obituary and guestbook online at www.mourning.com Martin & Castille-SOUTHSIDE-600 E. Farrel Rd., Lafayette, LA 70508, 337-984-2811

Funeral services will be held on Saturday, April 17, 2021 at a 1:30 PM Mass of Christian Burial at Our Lady of Fatima Catholic Church for Parrish Ladd Cline, age 47, who passed away peacefully with his beloved wife by his side on Thursday, April... View Obituary & Service Information

The family of Parrish Ladd Cline created this Life Tributes page to make it easy to share your memories.

Send flowers to the Cline family.