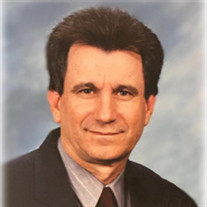 Services will be held for Pastor George Thomas Lewellyn, PhD at 10:00 AM on Saturday, January 30, 2021, at Calvary Chapel of Lafayette. He was 71 when he went home to be with his Savior, Jesus Christ, on Tuesday, January 26, 2021 at his residence in Broussard. His beloved son, Nathan Lewellyn, will conduct the funeral service. The family will be receiving guests on Saturday, January 30, 2021 from 9:00 AM until the time of service at 10:00 AM. Interment will be held at Bellevue Cemetery immediately following the service. For family members and friends who are unable to attend on Saturday, January 30, 2021 at 10:00 AM the service will be live-streamed for Pastor George Thomas Lewellyn, PhD. To join the group, click the link below. The video will appear on this group at service time 10:00 AM. www.calvarychapeloflafayette.org/live Survivors include his beloved Wife of 37 years, Brenda; his Son, Matthew Thomas and his wife, Cortney; his Son, Bradley; his Son, Parker; his Son, Eli and his wife, Kaylee; his Son, Nathan and his wife, Blair; his Brother, Chad and his wife Cassandra; his Sister, Gwen; his Grandchildren, Alexandra, Carson Thomas, Brooks, Henrietta, Otis, Brynn, James Thomas, and Ruth. George was preceded in death by his Parents, W. L. and Minnie Jean Moseley Lewellyn; his Brothers, Lesley and Bobby. George was born in Greenville, Mississippi. As the son of an Air Force Colonel who served in World War II and the Korean War, he grew up calling many places home. He also served as an officer in The United States Army. George received a BSBA in accounting from Delta State University and an MBA from Mississippi College. He went on to complete his CPA resulting in a successful teaching and business career. As a lifelong learner, George furthered his studies at New Orleans Baptist Theological Seminary where he received a Masters of Divinity and Doctor of Philosophy. He served as Pastor of Suburban Baptist Church in New Orleans from 1997 until 2002. George was called to be Pastor of Calvary Chapel of Lafayette from 2005 until the day he went to be with the Lord Jesus Christ. George deeply loved and was loved by his wife, his sons, his grandchildren, and many others. "For, He made Him who knew no sin to be sin for us, that we might become the righteousness of God in Him." 2 Corinthians 5:21 Upholding the honor of pallbearers will be Chad, Matt, Brad, Parker, Eli, and Nathan. Honorary pallbearers will be Carson, Brooks, Otis, and James. In lieu of flowers, donations can be made to Calvary Chapel of Lafayette, www.calvarychapeloflafayette.org/give View the obituary and guestbook online at www.mourning.com Martin & Castille-SOUTHSIDE, 600 E. Farrel Road, Lafayette, LA 70508, 337-984-2811

Services will be held for Pastor George Thomas Lewellyn, PhD at 10:00 AM on Saturday, January 30, 2021, at Calvary Chapel of Lafayette. He was 71 when he went home to be with his Savior, Jesus Christ, on Tuesday, January 26, 2021 at his residence... View Obituary & Service Information

The family of Pastor George Thomas Lewellyn, PhD created this Life Tributes page to make it easy to share your memories.

Services will be held for Pastor George Thomas Lewellyn, PhD...