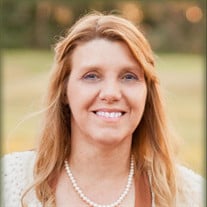 Patricia Laurie Hurst passed away June 12, 2021, surrounded by her family after her brief battle with cancer. She was born in Lafayette, Louisiana, and attended Chinchuba Institute for the Deaf, Louisiana School for the Deaf, and later Delgado Community College. Inheriting her love for culinary skills, Patti was an accomplished cook and attended culinary school where she excelled and was very fond of baking; finished courses in jewelry design; and periodically followed in the footsteps of her parents, and worked in the hospitality industry at several local hotels in Acadiana, where she was highly regarded for her attention to detail. Patti also, like every other member of her family at one time or another, worked alongside her father at the family restaurant of Poor Boy’s Riverside Inn, helping him in the office, and later at his sandwich location he opened upon his retirement, and cooked alongside him. Attending school away from home as a necessity due to being born deaf, Patti developed a deep love for New Orleans, something she and her mother strongly had in common throughout their lives. The best studies Patti achieved was that of learning and reading her Bible, which she has done faithfully for years. But her proudest roles were being a mother and grandmother. Patti is survived by her daughters Patricia Laura Estrada Courtois and husband Cye, Tonia Elyse Estrada, and Geneva Jean Orr Barr and husband Solomon; father, Larry Guy Hurst; sisters Kathlyn Elaine Alderman; Debra Hurst Thrower and husband Danny, and brother Richard Nelson Hurst and wife Lori Watkins; grandchildren Jaiden Renee Hurst, Grey Thomas Courtois, Loren Elyse Courtois, and Lawry David Barr; nephews Micah Jay Pifer and wife Megan, and Christian Davis Hurst. She was preceded in death by her son Ashton Edward Hurst, mother Kathlyn Landry Hurst, maternal grandparents Eugenia Grassmück Landry and Hulo “Poor Boy” Landry, founders of Poor Boy’s Riverside Inn Restaurant; paternal grandparents Zama Watts & Anselmn Galatin Hurst; and two brothers-in-law, James Stewart and David Alderman. Pallbearers will be Richard Hurst, Christian Hurst, Cye Courtois, Josh Travis, Solomon Barr, and Micah Pifer. Honorary pallbearers are Danny Thrower, Grey Courtios, Lawry Barr, Brayden, Isaac and Levi Pifer. Donations in Patti’s name may be made to the Catholic Deaf Center, 1404 Carmel Drive, Lafayette, Louisiana 70501. Per Patti’s request, she will be entombed at Lafayette Memorial Park alongside her son and mother. Services will be held Saturday June 19, 2021, at 11:00am in La Chapelle de Martin & Castille. Visitation will begin at 9:00am until time of services at Martin & Castille’s DOWNTOWN location, 330 St. Landry Street, Lafayette, LA. Reverend Jeff Abels will officiate. A heartfelt appreciation is extended by the Hurst family to the staff of St. Joseph's Hospice. View the obituary and guestbook online at www.mourning.com Martin & Castille Funeral Home - DOWNTOWN, 330 St. Landry, Lafayette, LA 70506.

Patricia Laurie Hurst passed away June 12, 2021, surrounded by her family after her brief battle with cancer. She was born in Lafayette, Louisiana, and attended Chinchuba Institute for the Deaf, Louisiana School for the Deaf, and later Delgado... View Obituary & Service Information

The family of Patricia L. Hurst created this Life Tributes page to make it easy to share your memories.

Send flowers to the Hurst family.