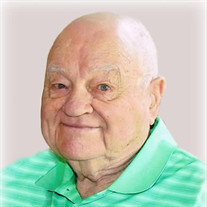 Private Funeral services will be held on Wednesday, January 13, 2021 at Cathedral of Saint John the Evangelist for Paul Crochet, 99 ½ years old, who died on Saturday, January 9, 2021 at Garden View Assisted Living in Lafayette. Interment will be in Lafayette Memorial Park Cemetery. Reverend Steve LeBlanc, Pastor of St. Basil Catholic Church in Judice, will conduct the funeral services. Click to join his Facebook group: www.facebook.com/groups/paulcrochet/ Survivors include his beloved wife of 73 years, Joyce Hernandez Crochet; one daughter, Peggy Crochet Piazza of Lafayette; two sons, Michael Crochet and his wife Lynn of Lafayette and Terry Crochet and his wife Diane Musson Crochet of Lafayette; four grandchildren, Travis Godley, Sara Crochet, Courtney Crochet Dartez, and Jenna Crochet Luna; nine great grandchildren, Wyatt, Ava, and Elliott Gooch, Olivia and Sara Godley, Madison and Aidan Beadle, and Trey and Bella Leger. He was preceded in death by his parents, Robert and Louise Hebert Crochet; one granddaughter, Lori Godley Gooch and all eight of his siblings. Paul was a devout Catholic and a veteran of the U.S. Navy, serving four years during World War II. He never felt the same about the sea after that and emphatically avoided boats for the rest of his life. He received his Bachelor of Science in Business Administration from SLI, now the University of Louisiana Lafayette, and became a Certified Public Accountant. Following graduation, he taught accounting at Port Arthur Community College and at USL. As highly active members of Sacred Heart Catholic Church in New Iberia and later St. Pius Catholic Church in Lafayette, the Crochets served both churches as collections treasurers and RCIA instructors, leading countless people to the Catholic faith. Many priests will recall the hospitality that Paul and Joyce extended to them over the years. One of their friends, Father Guy Lemoine stayed with them after he broke his leg and Father Henri Chiasson, when visiting from Canada, became another close friend. As avid golfers, the Crochets spent many years enjoying the game with their friends, travelling to courses around the South. Paul played golf almost every day saying, “You know, after playing for six days, I really need to take a day off to rest.” The Krewe of Andalusia was a big part of their lives bringing them joy and friendships, not to mention bestowing Mardi Gras royalty upon them. Paul also donated his time and skills to many organizations including Kiwanis and the St. Francis Diner as well as the Catholic Church. Pallbearers will be Terry Crochet, Travis Godley, Blake, Wyatt, and Elliott Gooch and Alex Luna Honorary Pallbearers will be David Crochet, Bobby Mendoza, Kenneth Black, Rena Batiste and Aidan Beadle. Memorial contributions can be made in Mr. Crochet's name to Hospice of Acadiana, 2600 Johnston St., Suite 200, Lafayette, LA 70503, or visit www.hospiceacadiana.com/donate/ A heartfelt appreciation is extended by the Crochet family to the staff at Garden View Assisted Living, especially their loving personal caregivers, Rena Batiste and Kenneth Black. View the obituary and guestbook online at www.mourning.com Martin & Castille-SOUTHSIDE-600 E. Farrel Rd., Lafayette, LA 70508, 337-984-2811

Private Funeral services will be held on Wednesday, January 13, 2021 at Cathedral of Saint John the Evangelist for Paul Crochet, 99 ½ years old, who died on Saturday, January 9, 2021 at Garden View Assisted Living in Lafayette. Interment will... View Obituary & Service Information

The family of Paul Crochet created this Life Tributes page to make it easy to share your memories.

Private Funeral services will be held on Wednesday, January 13,...

Send flowers to the Crochet family.