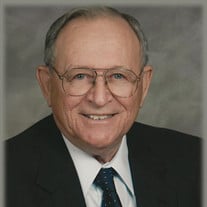 Private funeral services will be held in La Chapelle de Martin & Castille in Lafayette, for Paul Edward Varisco, 89, who passed away on Tuesday afternoon, August 17, 2021 at his residence in Lafayette. The family requests that a private visitation be observed at Martin & Castille's DOWNTOWN location. Interment will be in Calvary Cemetery in Lafayette. Rev. MSGR. Douglas Courville, JCL, Pastor of St. Stephen Catholic Church in Berwick, will conduct the funeral services. Survivors include his beloved wife of 71 years, Claudette Mouisset Varisco; his daughter, Christine Varisco Guidry and her husband, Nelson; his son, Dana Varisco and his wife, Christine; his sister, Barbara Varisco McGuyer and her husband, James; his grandson, Michael Varisco and his wife, Anita; his granddaughters, Shannon Gary and her husband, Travis, and Leah Malagarie; and his great grandchildren, Austin, Samantha, Matthew, Ethan, and Ryan. Paul was preceded in death by his father, Kelly Varisco; his mother, Mary Varisco Knight; and his brother, Patrick Varisco. Mr. Varisco was a veteran of 29 years of Military Service which included service in the Louisiana National Guard and the U.S. Army. He retired from active duty with the U.S. Army in August 1976 as a Chief Warrant Officer (CW3). For his service to his country, he was awarded the Legion of Merit Medal; the Meritorious Service Medal; the Bronze Star Medal w/ Oak Leaf Cluster; the Army Commendation Medal; the National Defense Service Medal; the Vietnam Service Medal; the Republic of Vietnam Combat Medal; the Republic of Vietnam Gallantry Cross w/ Pam and the Good Conduct Medal. Mr. Varisco was employed by the U.S. Army as a Commissary Officer and served at Stuttgart and Bamberg, West Germany and at Fort Polk, Louisiana from 1978 to 1983. In 1983, he was employed by Our Lady of Lourdes Regional Medical Center, Lafayette, as a Manager for Patient Food Service and served in that position until his retirement in 1994. Pallbearers will be Dana Varisco, Michael Varisco, Nelson Credeur, Travis Gary, and James Batiste. Memorial contributions can be made in Mr. Paul Edward Varisco's name to Amedisys Foundation, https://regions.billeriq.com/ebpp/AmedisysFoun/, or Wounded Warrior Project, https://support.woundedwarriorproject.org/Default.aspx?tsid=10043 . A heartfelt appreciation is extended by the Varisco family to Amedisys for the excellent hospice care, compassion and guidance given to our family and loved ones during his time of need. View the obituary and guestbook online at www.mourning.com Martin & Castille-DOWNTOWN-330 St. Landry St., Lafayette, LA 70506, 337-234-2311

Private funeral services will be held in La Chapelle de Martin & Castille in Lafayette, for Paul Edward Varisco, 89, who passed away on Tuesday afternoon, August 17, 2021 at his residence in Lafayette. The family requests that a private visitation... View Obituary & Service Information

The family of Paul Edward Varisco created this Life Tributes page to make it easy to share your memories.

Send flowers to the Varisco family.